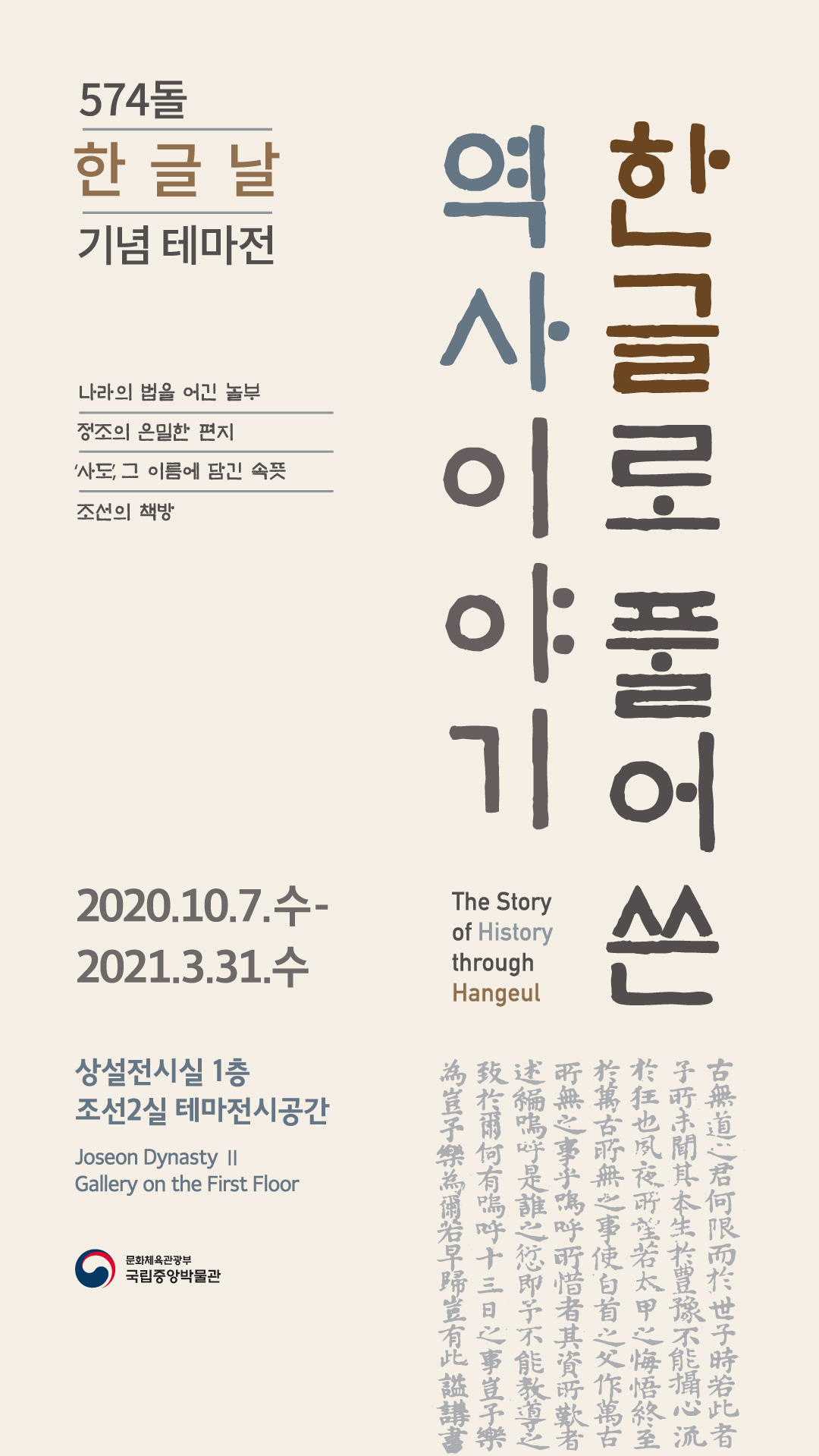 The story of History through Hangeul

From October 17, 2020 through March 31, 2021, the National Museum of Korea is holding the special exhibition The Story of History through Hangeul to commemorate the 574th anniversary of the proclamation of Hunmin Jeongeum (Correct Sounds for Edifying the People). The exhibition draws upon Yeoksa jaryo chongseo (Series on Historical Materials) that the museum has been publishing since 2004 to present stories found within the historical materials that it holds. It aims to encourage the general public, including teenagers, to develop a keener interest in history. Please come and enjoy this exhibition that translates historical materials written in Chinese characters or archaic Hangeul (the native Korean alphabet) into modern-day Hangeul and makes understanding them even easier through entertaining content.

-Exhibition Space: Joseon Dynasty Gallery II of Gallery on the First Floor
* To prevent the spread of COVID-19, visitors are allowed to enter the Permanent Exhibition Halls only after making advance reservations online.

(If open slots are available, admission tickets can be issued on-site.)

Overview of the Exhibition

I. “Nolbu, who Violated National Law”: A Story in Hangeul of Sharing Property during the Joseon Dynasty

- Bunjaegi(1560) documents from the sixteenth century on the equitable distribution of property between a brother and sister: “Official Records of Property Inheritance” regarding Kwon Deok-eung and his Sister

- Bunjaegi(1775) documents from the eighteenth century on bequeathing additional property to the eldest son, who was responsible for ancestral rituals,: “Unofficial Records of Property Inheritance” of Lady Yi, the wife of Kim Pal-gong

- Crown Prince Sado’s Jade Seal Created by Order of King Jeongjo with the Additional Honorific Name “Jangheon” (UNESCO Memory of the World; Collection of the National Place Museum of Korea)

Letter written to order Sim Hwan-ji to submit his resignation

Letter regarding a draft of a report to the throne

IV. “Bookstores of the Joseon Dynasty” through Hangeul Novels