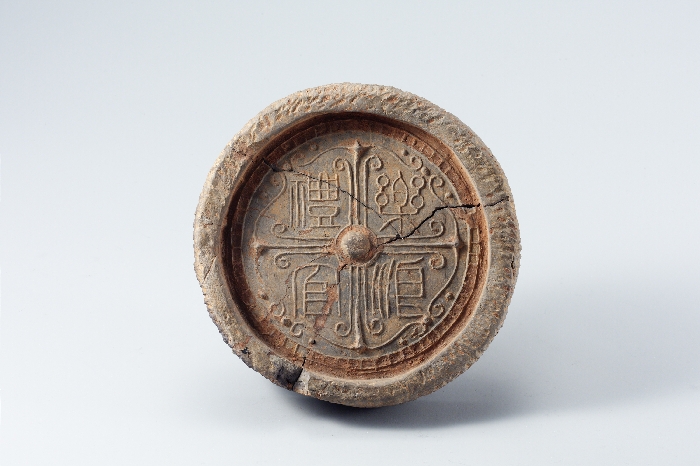 In 108 BCE, Emperor Wu of the Han Dynasty conquered the ancient Korean state of Wiman (later named Joseon), and established four Han colonies (or “commanderies”) on its territory, including Nangnang (also known as Lelang) in the area of present-day Pyongyang. It was in Nangnang that large-scale roof tile production began on the Korean Peninsula. A number of roof tiles dating to the Nangnang Period (108 BCE-313 CE) have been found in and around Pyongyang. Their shape, decoration, and manufacturing technique closely resemble those found in mainland China. This inscribed roof-end tile reads “Nangnangyegwan” (樂浪禮官), providing evidence that the Nangnang maintained an administrative post called a “yegwan.” The inscription is carved in bold relief and surrounded by various patterns, lending the tile a robust sense of stability. Other roof-tiles have been found with inscriptions naming administrative buildings, the era in which they were made, and wishes for longevity, e.g., “Nangnangbugwi” (樂浪富貴) and “Chunchumanse” (千秋萬歲). Inscriptions expressing positive omens were typically associated with the governance of the ruling dynasty of the time.