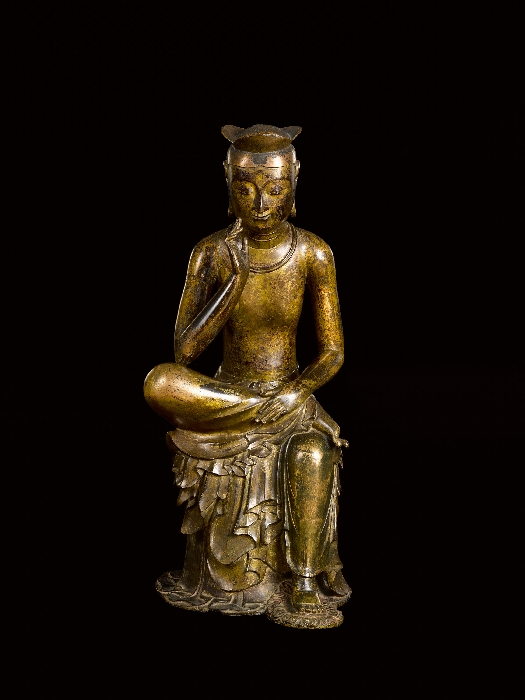 This statue strikes a classic contemplative pose with one leg perched up on the other knee and the fingers of one hand raised against the cheek. This pose derived from the image of the young Indian Prince Siddhartha Gautama contemplating the nature of human life is quite common in Buddhist sculpture. In China, such pensive statues were most widespread in the 5th and 6th centuries, but in Korea they were most frequently produced in the 6th and 7th centuries. This Pensive Bodhisattva statue (designated National Treasure #83) is 93.5 cm high, making it the tallest of all extant pensive bodhisattvas from the Three Kingdoms period (1st century BCE – 668 CE). Other distinguishing features of this statue include the crown, which is called either a samsangwan (crown with three peaks) or a yeonhwagwan (lotus crown), and the simple yet elegant necklace that the prince wears on his exposed upper torso. This sculpture is widely admired for its benign smile and fine physical proportions, which make it a splendid object of religious worship. It closely resembles a red-pine bodhisattva from Koryuji Temple in Japan, which was established by a Silla monk. This artistic masterpiece is also a significant archaeological artifact that attests to the exchange of Buddhist images between Korea and Japan early in their history.