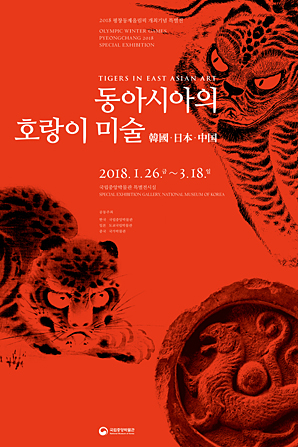 The exhibition will be held in the Special Exhibition Gallery of the National Museum of Korea from January 26 to March 18, 2018. It will present forty works from Korea including Tiger Under Pine Tree and Tiger Under Bamboo by Kim Hong-do (1745~1806?), thirty works from Japan including three pairs of large screens each titled Dragon and Tiger, and thirty-five works from China including an ancient weapon ornamented with a tiger design and a terra-cotta figurine of the twelve zodiac animals, making for a total of 105 works. In jade objects and ornaments, ceramics, sculptures, and paintings, visitors can see various representations and meanings of tiger. They depicted as a guardian god of the primitive beliefs of ancient times and in later Taoist and Buddhist art; they symbolize protection against evil spirits, auspiciousness, man of virtue and benevolent rule; and they became the subject of tradition and transformation in works of modern and contemporary art.

The AV room at the entrance to the Special Exhibition Gallery will run a high definition video that gives the audience a vivid experience about wild tigers, which inspired both awe and fear in the people of East Asia.

This exhibition will be a wonderful opportunity to understand the universality and unique characteristics of cultures of Korea, China, and Japan through symbolism and art.

On display are 105 paintings, sculptures, and craftworks of tigers from Korea, Japan, and China

For virtual reality experience of the special exhibition "Tigers in East Asian Art" in the national museum of Korea, click here.


For online exhibition of "The Korean Tiger: Icon of Myth and Culture", click here.

- Tigers in the Art of Korea - Park Kyungeun(Curator,f National Museum of Korea)

- Tigers in the Art of China - Huang Yi (Curator, National Museum of China)

3. Hands-on Exhibition, titled “Grrr, I Am a Tiger”

This is a hands-on exhibition for children featuring pictures and stories in a tiger picture book.

4. Performance “Journey of Fantasy,” In Search of the Tiger, A Journey for the “Album of Paintings” by Kim Hong-do (New pansori, Korean folk opera)

This is a story about Kim Hong-do going into the wild to find a tiger to do sketches for an album of paintings and his encounter with a tiger.