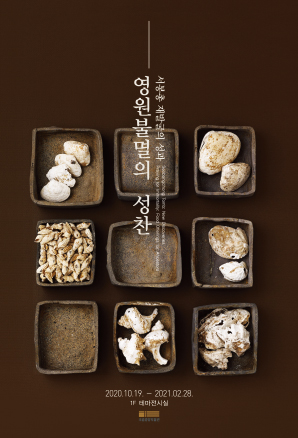 Starting October 19, the National Museum of Korea is hosting the special exhibition Praying for Immortality: Food Offerings for Ancestors. It presents results from the 2016 and 2017 re-excavation of Seobongchong Tomb in Gyeongju, which had originally been surveyed by Japanese archeologists early in the past century.

Seobongchong Tomb is among the royal Silla Kingdom tombs clustered in the Daereungwon Ancient Tomb Complex (Historic Site No. 512) in Gyeongju. It consists of parallel North and South Mounds, with the former constructed earlier than the latter. Japanese officials excavated the North Mound in 1926 and the South Mound in 1929, but failed to organize the excavated relics or keep accurate records. Upon realizing the academic significance of Seobongchong Tomb, in 2014 the National Museum of Korea published a report on these relics. In 2016 and 2017, the museum re-excavated the tomb, identified some of the errors in the previous Japanese surveys, and discovered new findings. This exhibition introduces the results of the re-excavation of Seobongchong Tomb to the general public in an approachable manner.

The highlight of this exhibition is ritual food offered to Silla royalty from 1,500 years ago, which is being opened for public viewing for the first time. Visitors can see the bones of dolphins and blowfish and the shells of sea urchins unearthed from Seobongchong Tomb. Moreover, the exhibition features large jars for containing ritual foods and some unusual square lidded bowls exclusive to Seobongchong Tomb that appear similar to today’s stackable side-dish boxes.

Besides the animal remains, the information panels detailing the results from the re-excavation of Seobongchong Tomb are clearly noteworthy. These panels are organized according to two main themes: Correcting Errors from the Japanese Surveys (the size of the mounds; the name and structure of the tomb) and New Discoveries (the wooden frame structure; stone table; rituals held outside the stone slabs of the tomb). Other interesting stories from Seobongchong Tomb, including one about a gisaeng (female entertainer) from Pyongyang who wore a golden crown, David Chong, and the Crown Prince of Sweden, are also recounted on the information panels to provide the public with an entertaining experience while learning about Seobongchong Tomb.

Furthermore, the exhibition includes a video clip on the ritual foods identified in Seobongchong Tomb and displays pictures and graphs offering detailed information on the kinds of animals identified in the food remains from the tomb. In addition, the exhibition proposes that the large fish mentioned in Samguk sagi (Historical Record of the Three Kingdoms) might refer to a whale and that the croaker found in Large Jar No. 2 in the South Mound might have come from the Yellow Sea far to the west. It also suggests that the bowls from regions outside of Gyeongju reflect visitors from the provinces attending the funeral of the owner of the South Mound.

This exhibition serves as a timely report on the results of the re-excavation of Seobongchong Tomb. The National Museum of Korea will continue to hold such exhibitions to promptly present its research discoveries to the public. Moreover, it plans to draw upon current research outcomes and a subsequent full re-examination of the surveys conducted during the colonial era to publish more comprehensive results, including conjecture on to the owners of Seobongchong Tomb.