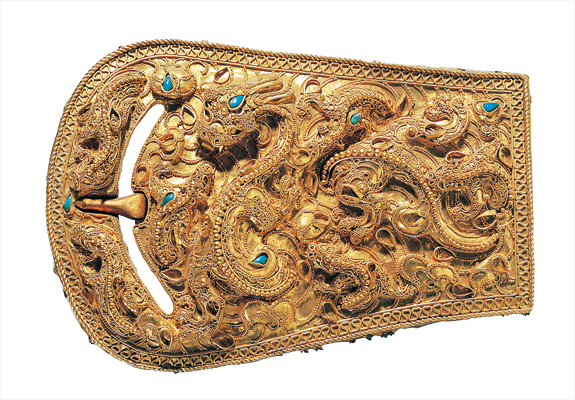 This gold belt buckle, designated as National Treasure No.89, was discovered on October 21, 1916, during the final stages of excavations at Seokam-ri Tomb 9 in Daedonggang-myeon, Daedong-gun, Pyeongannam-do (present-day Nangnang District, Pyongyang). Because of its resplendent decoration and craftsmanship, which surpasses even similar artifacts from China, the belt buckle immediately received great attention. During the Japanese colonial period, the Joseon Government-General Museum actively undertook excavations of the Nangnang tombs in Pyongyang, seeking to prove the existence of the Nangnang (Lelang) Commandery, believed to have been a colony of the Han Dynasty. The excavation was carried out by Sekino Tadashi of the Department of Architecture at Tokyo Imperial University, who was the leading researcher with ties to the Japanese colonial government. On discovering this gold belt buckle, Sekino Tadashi could not contain his excitement. He believed that the buckle had actually been worn by the deceased, since it was found inside the coffin in the area of the waist. After its discovery, the buckle became one of the highlights of the collection of the Joseon Government-General Museum, and it was then transferred to the National Museum of Korea after Korea’s independence in 1945. To this day, it is widely regarded as one of the most magnificent metalcrafts ever found on the Korean peninsula.

The belt buckle is made of solid gold, which is why it has been able to retain its splendor for some two thousand years. Looking at the splendid design of a large dragon surrounded by six smaller dragons, one cannot help but be awed by the exceptional skill of the craftsperson who attached hundreds of gold granules to a thin gold plate. The dynamic dragon design had to be meticulously planned and composed in advance, and then executed with highly advanced production techniques, leaving no margin for error. Both the neck and body of the large dragon are embellished with a line of gold beads, soldered onto a thin gold wire. Amazingly, this technique was also used to express the smaller dragons as well. Moreover, the faces, legs, and claws of all of the dragons are rendered with the same standardized method, giving the entire composition a tremendous sense of unity. As a final touch, small precious stones of turquoise were inserted as highlights. A total of forty-one turquoise stones were originally set into the design, but only seven now remain.

For decades, this exquisite belt buckle was thought to be one-of-a-kind, but that changed in the early 1980s, when a similar buckle was found at a fortress site in Kharashahr (also known as Yanqi) in the Xinjiang Uyghur Autonomous Region of China. The two buckles are virtually identical in terms of their material, shape, production technology, and design composition. Since then, ten more buckles like this one have been found, arousing great scholarly interest. Some of these buckles are made from gold, while others are made of silver. All of them are shaped like a horse’s hoof, and they are usually decorated with embossed animal designs, embellished with gold granules and gold threads. Importantly, all of these belt buckles have been found in areas that are peripheral to central China, with none having ever been found in the Central Plains region of China. As such, some have speculated that the buckles may have been badges or emblems that were distributed by the Han emperor to surrounding tribes, but that hypothesis is still up for debate. 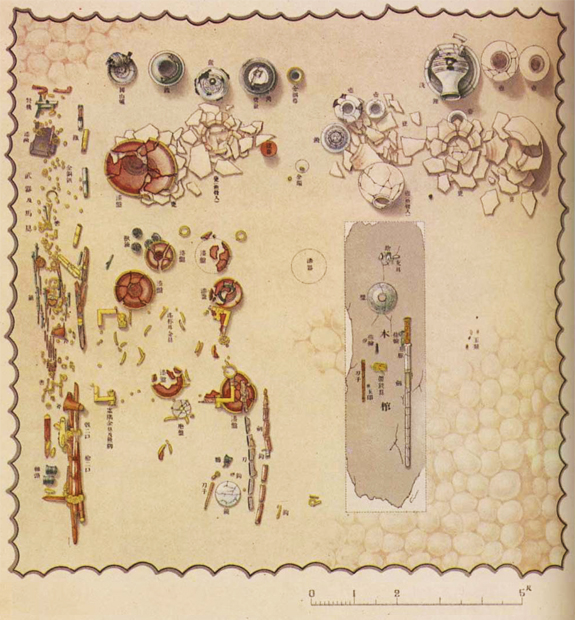 This is the plan for one of the ten Nangnang tombs that were excavated in 1916 as part of the first series of archaeological investigations undertaken by the Joseon Government-General Museum. The tomb, which is a typical wood-framed tomb with an outer chamber and inner coffin, dates to the mid-first century CE, and it remains the greatest Nangnang tomb ever discovered, in terms of both size and grave goods. 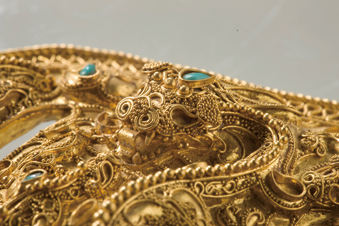 Head of the large dragon 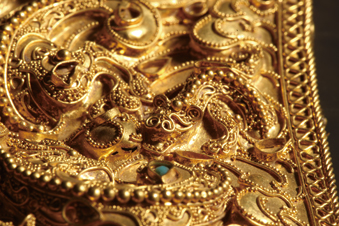 Head of a small dragon

The head of the large central dragon points to the lower right of the belt buckle, and its open mouth contains a tongue and four protruding teeth expressed with a thin sheet of gold, as well as additional teeth made from gold granules. The dragon’s nostrils, horns, and tear-shaped eyes are formed by coils of gold wire, while the ears are expressed by discs of gold granules. Three large gold beads are attached to the dragon’s forehead, two of which are encircled by gold wire.