One of the most renowned Buddhist sculptures ever produced in East Asia, this Pensive Bodhisattva (National Treasure 83) makes an excellent starting point for studying the history of Buddhist sculpture in Korea. Created in the sixth or seventh century, the sculpture bears an uncanny resemblance to the wooden Pensive Bodhisattva from Koryuji Temple in Kyoto, and thus provides compelling evidence for cultural exchange between ancient civilizations of Korea and Japan.

In China, pensive bodhisattva sculptures were usually secondary to the main Buddha, and were rarely produced as independent figures for worship. During Korea’s Three Kingdoms Period (57 BCE-668 CE), however, the Baekje Kingdom began sculpting pensive bodhisattva images with no adjoining Buddha. Such sculptures became enormously popular, vividly expressing the contemplative pose with a complex rendering of the form that clearly stood apart from the Chinese versions of the figure, which typically featured exaggerated or oversimplified postures and a schematic repetition of creases in the robe. 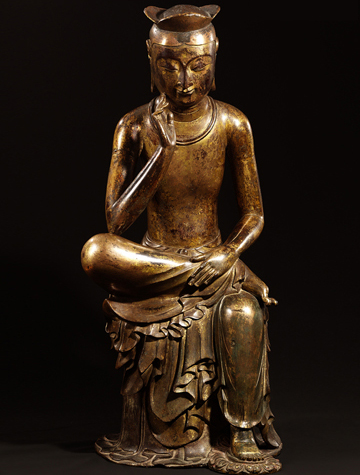 The Pensive Bodhisattva statue strikes a classic contemplative pose, with one leg perched up on the other knee, and fingers placed gently against the cheek. This iconic pose, which represents Prince Siddhartha’s contemplation of human life prior to his enlightenment, sometimes appears in Indian Gandhara relief sculptures depicting the life of the Buddha and in Buddhist statues of China’s Southern and Northern Dynasties. Most ancient Chinese statues with this pose were produced in the fifth and sixth centuries, and were recorded under the names of “prince statue” (太子像), “contemplation statue” (思惟像), or “Dragon Flower Tree statue” (龍樹像). In Korea, pensive bodhisattva statues reached their peak popularity during the sixth and seventh centuries, and were generally thought to depict Maitreya, the Buddha of the future. Through the influence of Korean pensive bodhisattva statues, Japan began producing its own versions of the form during the Asuka (538-710) and Hakuho (late seventh-early eighth century) periods.

The association between pensive bodhisattva statues and Maitreya Bodhisattva was particularly strong in the Silla Kingdom, where the fierce military forces known as the “Hwarang” (“Flowering Knights”) were viewed as an earthly manifestation of Maitreya. In Silla, both Maitreya and Cakravartin (“universal ruler”) were popularly worshipped, so some have speculated that Silla pensive bodhisattva statues were intended to depict Maitreya Bodhisattva. As yet, however, there is insufficient historical evidence to confirm these claims, which is why such statues continue to be referred to simply as a “pensive bodhisattva.”

In addition to being the largest Korean gilt-bronze pensive bodhisattva (93.5cm tall), National Treasure 83 is widely considered to be the most beautiful example of the form. Perfectly cast with an elaborate technique, the figure has a simple but balanced body, natural three-dimensional creases in the clothing, and clearly rendered facial features, highlighted by a serene smile. Together, these elements give this religious sculpture a look of sublime beauty.

The figure is wearing a simple crown consisting of three semi-circles, known as a “three-mountain crown” or “lotus flower crown.” With no surface decorations, the simple crown exudes a powerful sensation. This type of crown is rarely seen on Indian or Chinese bodhisattva statues. The long eyebrows form twin arches across the top of the round face, joining in the middle to point down at the nose. The small but elongated eyes are turned slightly upwards at the end, enhancing the thoughtful impression. Almost counterbalancing that impression, however, the sealed lips are curled into a gentle smirk, conveying an air of mystery.

The upper torso is bare, showing subtle chest muscles and a slender waist. The fingers on the upraised hand are delicately splayed, implying movement and a sense of rhythm. For symmetry, the bent toes on the raised right foot seem to be flexing. Sculpting the right arm is always one of the main challenges for any pensive bodhisattva statue. In order to have the elbow placed on the knee and the hand on the cheek, the arm is often unnaturally lengthened. In this case, the sculptors overcame this problem with a dynamic composition, wherein the right knee is slightly raised and the head is subtly tilted, so that the bent fingers gently rest on the cheek. The V-shaped bend in the right arm creates an organic flow that carries through the head and upper body. 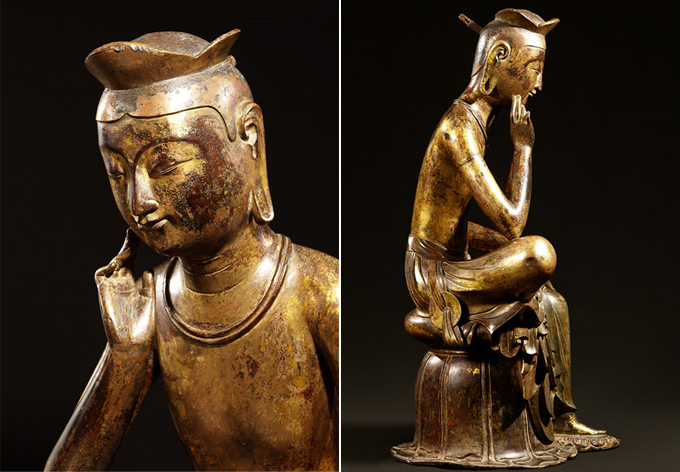 Discovered during the Japanese colonial period (1910-1945), the exact provenance of this statue is unclear. Thus, some scholars believe that it was made in the Silla Kingdom, while others argue that it was made by the Baekje Kingdom. A possible clue to this mystery can be found at Koryuji Temple in Kyoto, Japan, which houses a wooden pensive bodhisattva that shares many key affinities with this statue. Both sculptures feature the same type of crown, a similar chest and waist, a waistband with ornaments draped on both sides of the chair, and a robe tucked under the perched right leg. Because of such similarities, the two sculptures are believed to evidence cultural exchange between the ancient civilizations of Korea and Japan.

Notably, it is recorded in Chronicles of Japan (日本書紀) that, in 623, Silla sent a Buddhist statue that was enshrined in Koryuji Temple. Also, whereas most ancient wooden sculptures from Japan were carved from camphor or nutmeg trees, the Koryuji statue was made from red pine (Pinus densiflora), which grows primarily in Gyeongsang Province. Furthermore, unlike most sitting sculptures, in which the head and body are carved separately and attached, the Koryuji statue was carved from a single piece of wood, which is quite unusual for a pensive bodhisattva. All of these details suggest that the Koryuji statue may have been produced by Silla, which would mean that National Treasure 83 is also a Silla sculpture.

However, some scholars have contended that the Koryuji statue has a more placid appearance and different aesthetics from those of National Treasure 83. Citing the sculpture’s outstanding balance, harmonious form, and elegant style, they argue that National Treasure 83 was likely produced by Baekje, which was known for its refined sculpting techniques. Hopefully, the question of who produced the statue will be definitively settled with the discovery of new materials and resources in future.