This statue is the oldest Buddhist sculpture with an inscribed date that has ever been found in Korea. The inscription on the back of the halo states that it was produced in 539 in the Goguryeo Kingdom. Adapting the overall style of Buddhist sculpture from China’s Northern Wei Dynasty with domestic elements, this statue is viewed as one of the first attempts to establish and assert Korean aesthetics. It is currently exhibited in the Buddhist Sculpture Gallery of National Museum of Korea. 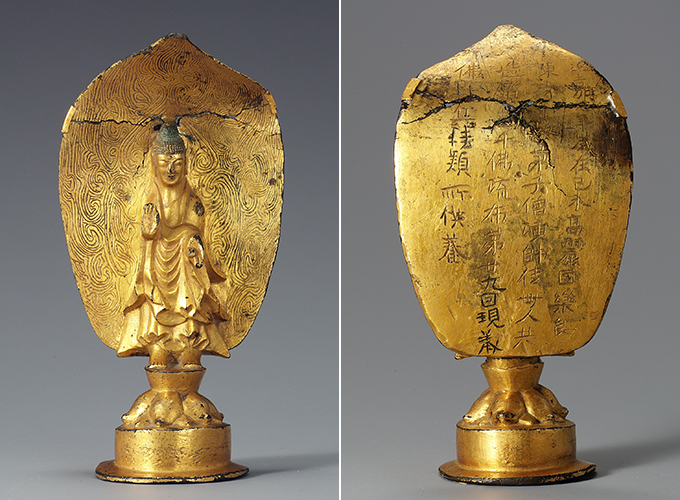 Soon after the Goguryeo Kingdom embraced Buddhism, which had been transmitted from China’s Former Qin, Chomunsa Temple and Ibullansa Temple were built in 375, followed by Gusa Temple in Pyongyang in 393. During his reign, Goguryeo’s King Jangsu (r. 413-491) relocated the capital to Pyongyang. In accordance, he also had the tomb of King Dongmyeong (r. 37 BCE-19 BCE) moved to Pyongyang, and constructed a huge temple, Jeongneungsa Temple, next to the tomb. Unfortunately, there are no extant artifacts or records revealing the nature or style of Buddhist sculptures that were enshrined in these temples.

Although Buddhism was first introduced to Korea around the fourth century of the Three Kingdoms period, the vast majority of extant Korean Buddhist sculptures were produced after 500 CE. This gap indicates that Buddhism did not immediately take root with all of the Korean people. Finally beginning to fill in that gap, this gilt-bronze Buddha with an inscription that reads “seventh year of yeonga” marked a new beginning for the history of Korean sculpture. In the summer of 1963, the statue was accidentally discovered in Uiryeong, South Gyeongsang Province. Despite its small size (16.2cm high), it has enormous significance as the oldest Korean sculpture with an inscribed date and the first Korean Buddhist statue showing indigenous aesthetics.

Consisting of a Buddha, lotus pedestal, and large halo sculpted from a single piece of bronze, the entire statue is gilded, such that it still radiates with a vibrant gold sparkle. The casting and sculpting techniques used to produce this sculpture were rather rough. The front of the spade-shaped halo is embellished with a vivid geometric flame design with no regular pattern. The Buddha stands straight on the lotus pedestal with a magnificent posture. Interestingly, the hair is piled in curls (a style rarely seen in early Buddhist sculpture), topped by the ushnisha, a protrusion of flesh on the top of Buddha’s head. The ears are represented as simple ovals with no details. The oval face is reminiscent of gilt-bronze Buddhas produced by the Northern Wei Dynasty of China or images from China’s Yungang Caves and Longmen Caves. Although the outlines of the facial features are lightly sculpted, the gently closed eyes and soft smile on the lips convey a sense of serenity.

Wearing a thick kashaya robe, the contours of the long, thin body are clearly revealed. With the right hand raised and the left hand lowered, the figure is expressing the combined hand gesture of the abhaya mudra (representing reassurance) and the varada mudra (representing the granting of wishes). Following the Chinese-style pobok (袍服) robes, the Buddha is completely covered in the thick robe, one end of which is draped across the left arm, and the inner clothing is suggested with a simple diagonal line above the outer robe. The cascading creases of the outer robe shift slightly to the right as they descend down the abdomen, for a dynamic look. The lower hemlines stretch sharply from side to side, almost resembling the fins of a fish. The feet and ankles have a bulbous appearance, as they are larger than normal in proportion to the body. The pedestal is composed of a lotus with eight leaves, with another layer of leaves peaking out from between those leaves. 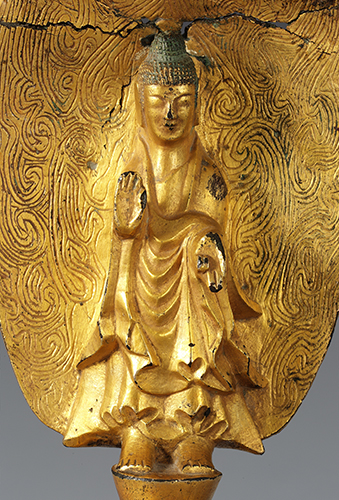 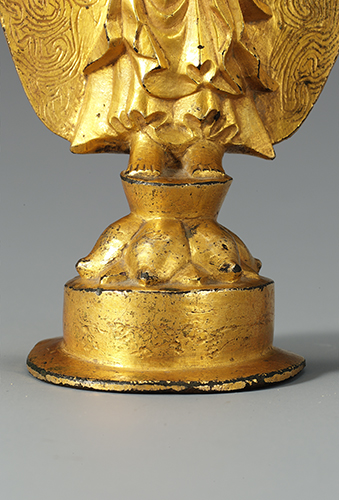 If we were only to consider the style of the sculpture and its place of discovery (i.e., Uiryeong, South Gyeongsang Province), it would naturally be classified as a Silla gilt-bronze Buddha. Indeed, the rough and simple aesthetics seem to correspond to the distinctive aesthetics of Silla Buddhist sculpture. However, according to the inscription on the back of the halo, this halo was produced as one of 1000 Buddhas in Pyongyang of the Goguryeo Kingdom.

At one time, the upper part of the halo had broken off, but it has now been reattached. The front of the halo is filled with a free and dynamic flame design, visualizing the invisible sacred spirit of Buddha. The back bears an inscription with forty-seven Chinese characters in regular script, which was carved after the casting had been completed. After the inscription was added, the entire surface was plated with gold. 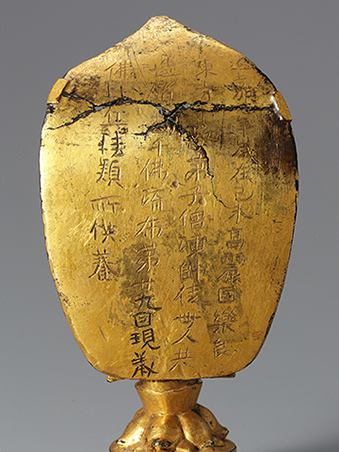 Over the years, the inscription has been interpreted in a few different ways, but the most common translation is as follows:

In the gimi year, the seventh year of yeonga, Seungyeon—who is the abbot of Dongsa Temple in Nangnang of the Goguryeo Kingdom, as well as a reverent disciple of Buddha—and forty Buddhists together produced and distributed 1000 Buddhas. This statue is the twenty-ninth Buddha donated by Beobyeong, a Buddhist nun.

Although the term “延嘉” (“yeonga”) is believed to refer to an era name of Goguryeo, that word has never been seen in any other written records from Korea or East Asia. Thus, this inscription is an invaluable primary source for epigraphy, filling in gaps left by history books. The term “己未年” (“gimi year”) indicates a year from the traditional sexagenary cycle, which could be 479, 539, or 599. Based on the sculpting and stylistic characteristics, scholars have confidently estimated the year to be 539. The year 479 is too early, because the style of a Buddha being fully covered by the Chinese-style pobok (袍服) robes had not yet appeared in Chinese Buddhist sculpture, while the year 599 is too late, because Korean sculpture of that time was primarily influenced by the later styles of Northern Qi, Northern Zhou, and Sui Buddhist sculpture.

The term “樂良” (“Nangnang”) is estimated to be present-day Pyongyang, while “東寺” (“Dongsa”) could mean the “eastern temple” or could be the actual name of a temple. This statue was produced as “因現義佛” (“the twenty-ninth Buddha”) from a set of 1000 Buddhas. The name of the twenty-ninth Buddha corresponds to the names of the 1000 Buddhas from Sutra of the Names of 1000 Buddhas (千佛名號經). We can only wonder what ever became of the other 999 Buddha statues.

Various stylistic elements of this sculpture reflect the influence of Buddhist sculpture of Northern Wei, including the long face and body, the robe that covers the entire body, the fin-shaped lower hemline, and the combined hand gesture. Other elements, however, clearly diverge from Northern Wei Buddhist sculpture, such as the rendering of the creases in the robe as planes, rather than lines, seemingly cut with a single swipe of the knife. Moreover, three hemlines protrude sharply from either side of the figure, conveying a strong sense of confidence and power.

Overall, gilt-bronze Buddhas of Northern Wei are characterized by meticulous details and extreme decorativeness. In most cases, the hemlines of the clothing are treated like tiny ripples, or a series of tiny loops. On the other hand, this statue has extremely simplified creases, with only two or three folds. This boldness and sense of volume seem to epitomize the style of Goguryeo art. 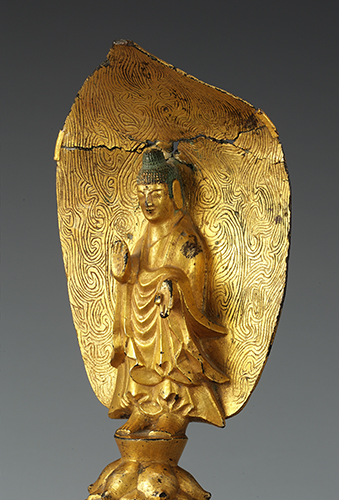 The sense of volume is further accentuated by the flame design that is thinly incised on the flat surface of the halo. Furthermore, the leaves of the lotus petals are slightly upturned at the tip, looking fresh and supple, as if they could snap with the slightest touch. Creating harmony between the sharp points and movement, these details combine to express the invisible energy being emitted from the body.

The formal characteristics of the statue demonstrate that the beauty of Korean aesthetics was created by boldly simplifying or eliminating excess details from imported styles, while highlighting other traits. This statue does not show the rigidity in lines or volume that can easily occur when foreign styles are copied. On the contrary, the lines are bold and vivacious, transmitting a tangible energy. This spirit of confidence continued to characterize Korean sculptural aesthetics throughout the Three Kingdoms period.

This statue confirms that the Goguryeo Kingdom—the strongest of the Three Kingdoms at the time—was the first to receive the influence of Chinese culture, due to its shared border with China. More significantly, the statue shows that Goguryeo established its own culture, which then spread to other regions, including the distant territory of Silla. This statue was taken to a remote area of the Silla Kingdom by a monk and other Buddhist disciples who were seeking to spread their religion. In addition to exemplifying the spirit of Goguryeo and the aesthetics of Korea, this sculpture is the embodiment of the Buddhist truth.