The first excavation ever led by Korean archaeologists was conducted by the National Museum of Korea in May 1946 at Noseo-dong Tomb 140, a Silla tomb in Gyeongju, Gyeongsangbuk Province. The decision was made to excavate this particular tomb because it was severely damaged and in danger of being completely destroyed. Tomb 140 is located in the Noseo-dong Burial Ground, which is the westernmost of Gyeongju’s Silla burial grounds. In the 1930s, a total of 155 tomb mounds were identified within the city limits of Gyeongju, all of which were assigned a serial number. 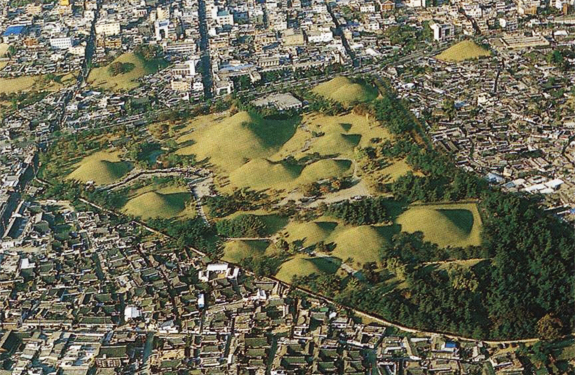 View of the wooden-chamber tombs with stone mounds of Gyeongju. This burial ground has great significance in the history of Korean archaeology, as the site of the first excavation ever conducted by Korean archaeologists, in 1946.

Discovery of Artifacts Associated with King Gwanggaeto the Great

When Tomb 140 was given its serial number, only two meters of its mound remained above ground, and two houses had been built upon that mound. Thus, it was initially thought that the mound contained only a single tomb. However, the 1946 excavation of the mound revealed two conjoined tombs that were attached along a north-south axis. Silver bells were found in the northern tomb, which was thus named Eunnyeongchong Tomb (銀鈴塚). The southern tomb contained a bronze bowl (a “hou”) associated with King Gwanggaeto the Great (廣開土太王, r. 391-413) of Goguryeo, and thus came to be known as Houchong Tomb (壺杅塚).

The mound of Houchong Tomb was an estimated 16 m in diameter and 4 m tall. Fortunately, the main burial structure, including the wooden chamber, was completely intact and well preserved. The wooden chamber was divided by a partition wall into two separate spaces: one where the deceased was laid to rest and one where the grave goods were kept. Excavations of the first space yielded various personal ornaments (most of which seem to have been worn by the deceased), along with the bronze bowl and a sword with a ring-shaped pommel, both of which were found inside the wooden coffin. Other metal vessels and pottery were discovered within the space for the grave goods.

Most Silla wooden-chamber tombs with stone mounds have a separate space for grave goods, typically located near the head of the deceased, where metal vessels have often been found. The bronze bowl from Houchong Tomb, however, was found in an unusual place: inside the wooden coffin, to the right of the head, with its lid in place.

The bronze bowl has a hemispheric body, a flat lid, and a shallow foot. The bowl is relatively large, as compared to other bronze vessels with lids that have thus far been discovered. The bowl is 10.3 cm tall with a maximum diameter of 23.8 cm; the diameter of the mouth is 22.9 cm and that of the base is 15.0 cm. The total height of the lid is 9.1 cm (including the 3 cm knob), and the diameter of the mouth of the lid is 22.8 cm.

The bottom of the bowl bears an embossed inscription that seems to have been carved into the mold and cast along with the bowl itself. The inscription consists of sixteen characters (four columns, each with four characters): “乙卯年國罡上廣開土地好太王壺杅十.” Also, above the inscription is a symbol that resembles a “#” symbol. The style of the script is nearly identical to that featured on the Stele of King Gwanggaeto the Great, and both this inscription and the stele feature the simplified Chinese characters for 乙, 年, 國, 罡, 開.

The first part of the name—“國罡上,” or “Gukgangsang”—refers to the place where the king’s tomb was located. This convention was generally used to create the posthumous names of Goguryeo kings. The second part of the name—“廣開土地,” or “Gwanggaetoji”— is a title that emphasizes the king’s achievements in expanding the kingdom’s territory. Finally, “好太王,” or “Hotaewang,” is an honorific title reserved for kings whose magnificent deeds afforded them the highest respect. Hence, the full title Gukgangsang gwanggaetoji hotaewang (國罡上 廣開土地 好太王) appears to be a posthumous name that was created following the king’s death. In its entirety, the inscription on the bronze bowl can be interpreted to mean “hou vessel for (i.e., commemorating) Gukgangsang gwanggaetoji hotaewang.”

The date in the inscription is the “eulmyo” year (乙卯年), which is a year in the sexagenary (i.e., sixty-year) cycle of the Chinese calendar; however, it is not known which particular eulmyo year the inscription refers to. Since the king died in 412 CE, it is generally believed that this eulmyo year is 415 CE, although some scholars have argued that it is more likely to be 475, based on a stylistic analysis of the bronze bowl.

Bronze Bowl with Inscription for King Gwanggaeto the Great, Goguryeo (415 CE), Houchong Tomb (Gyeongju), Height: 19.4 cm, Treasure 1878
Inscription from the base of the bronze bowl from Houchong Tomb, which reads “hou vessel for Gukgangsang gwanggaetoji hotaewang.”

Illuminating the Relations Between Silla and Goguryeo

The inscription reveals that bronze bowls like this one were called “hou” (壺杅) in Goguryeo. However, the meaning of final character in the inscription—“十”—remains something of a mystery. This character literally means “ten,” so some have suggested that it is a serial number, indicating that at least ten of these bronze bowls were produced. Nevertheless, many other possible meanings of this character have been put forth: that it is a meaningless placeholder, inserted for balanced composition; that it is a simplification of the character “什,” meaning “jipgi”(什器, “implements”); that it refers to “wonman” (圓滿), meaning “everlasting” in Buddhist philosophy; that it is a punctuation mark that concludes the sentence or a symbol for good fortune; or that it concerns the weight of the bronze used to make the hou vessels. As yet, all of these theories are mere suppositions with no strong supporting evidence.

Similarly, the meaning of the “#” character above the inscription is still up for debate. The literal meaning of the character is “water well,” but some speculate that it may be a symbol imbued with magical meaning, a mark associated with the maker of the bowl, or a symbol intended to ward off evil spirits. Interestingly, this character seems to be tilted at a 45-degree angle, as compared to the other characters. It should be noted that this symbol has also been observed on Baekje, Silla, and Gaya pottery.

This vessel raises an obvious question: why was a bronze hou from Goguryeo buried in a Silla tomb? The bowl is estimated to have been produced in 415 CE, which was the fourteenth year in the reign of Silla’s King Silseong (實聖 麻立干, r. 402-417). Before ascending to the throne, King Silseong had lived in Goguryeo as a hostage from 392 to 401. Then in 412, Bokho, the son of Silla’s King Naemul (奈勿尼師今, r. 356-402), was sent as a hostage to Goguryeo, where he stayed until 418. Given this relationship between Goguryeo and Silla, it is reasonable to believe that a precious object commemorating Goguryeo’s King Gwanggaeto the Great could have been sent to Silla.

Based on the dates of other artifacts recovered from Houchong Tomb, the tomb is believed to have been constructed in the early sixth century, just before the tradition of constructing wooden-chamber tombs with stone mounds came to an end. The current theory is that the bronze bowl was likely sent from Goguryeo to the Silla capital (present-day Gyeongju) around the time of its production in the early fifth century, then handed down by subsequent generations for about a century, before being entombed with the deceased. One possible scenario is that the hou vessel may have been produced for an extravagant ceremony to commemorate the one-year anniversary of the death of King Gwanggaeto the Great in 415, and then given to a representative of Silla who attended the ritual.

The excavation of Houchong Tomb was a true landmark in the history of Korean archaeology, and not only because it was the first excavation that was conducted by Korean archaeologists. These excavations also provided an important impetus for the development of both the National Museum of Korea and Korean archaeology as a whole. While the artifacts recovered from this site may not be as impressive as those from other Silla wooden-chamber tombs with stone mounds, they include many atypical items that have not been found in any other tombs, including bronze ritual implements, a quiver made from iron plates attached to a wooden base, a sword with a round-pommel inlaid with fish and dragon motifs, as well as the hou vessel. Thus, from the moment of their discovery, these anomalous artifacts have been the subject of great interest.