These two horse-rider-shaped vessels, designated as National Treasure No.91, are representative artifacts of the Silla Kingdom and recognizable emblems of Korea’s cultural heritage. Upon their discovery in 1924, the pair of unique ceramic vessels immediately grabbed people’s attention, and they remain among the most popular displays at the National Museum of Korea. The vessels seem to depict a master and servant, each on horseback. The riders’ clothing and the horse trappings are expressed in a very realistic manner, providing important information about the daily lives of the Silla people. 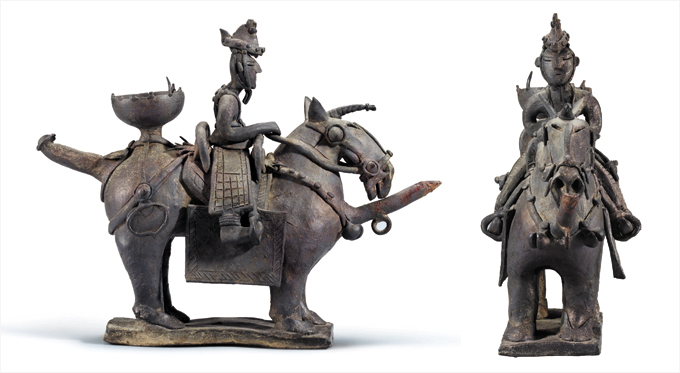 Discovery of the Vessels

Public interest was greatly aroused by the discovery of that crown, with Geumgwanchong Tomb being hailed as “Tutankhamen’s Tomb of the East.” In truth, however, little was known about the structure or conditions of the tomb, since the crown had been discovered by accident during the construction of a house. Two other tombs were identified at the construction site, which were later named Geumnyeongchong Tomb and Signichong Tomb. Japanese archaeologists persuaded the Joseon Governor-General to give them permission to excavate Geumnyeongchong Tomb, since its mound had been partially destroyed. To the surprise of everyone, the resultant excavations of Geumnyeongchong Tomb uncovered another gold crown.

Geumnyeongchong Tomb is a wooden-chamber tomb with a stone mound, consisting of an in-ground wooden chamber that is covered first with a thick layer of stones, and then with dirt. A wooden coffin was placed in the wooden chamber, with the head of the deceased facing east. Buried on the east side of the coffin was a small casket containing grave goods, which is where the horse-rider-shaped vessels were found.

Tomb of a Prince?

The person buried in the tomb was laid to rest wearing a gold crown, gold earrings, a gold belt, and a sword at the waist. The opulent nature of these objects indicates that the deceased may have been a member of the Silla royal family. The deceased appears to have been male, based on the fact that he wore thin-ringed earrings and a sword. Interestingly, the gold belt was significantly shorter than other belts from Silla tombs. Since the gold crown is also smaller than comparable examples, it is likely that the deceased was a child. Considering all of this information, the occupant may have been a young prince who died before reaching adulthood.

Function of the Vessels

At first glance, these artifacts may look like simple ceramic sculptures, but they actually function as serving vessels for pouring liquids. The hollow interior of the horse holds about 240 ml of liquid; it could be filled through a funnel on the horse’s back, and the liquid could be poured out through a tubular spout extending from its chest. The vessels may have been used by members of the Silla royal family to serve alcohol or water. 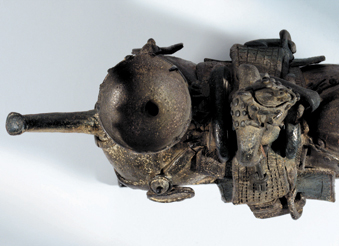 Funnel on horse’s back 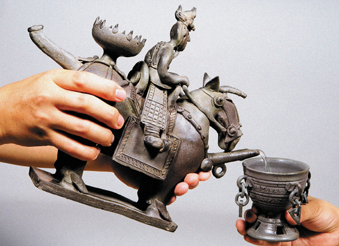 Why would a serving vessel be made in the shape of a horse? Of course, horses were very important to the Silla society, especially as a means of transportation. But the Silla people also believed that horses guided the deceased to the afterlife. Perhaps reflecting this belief, many artifacts associated with horses have been discovered in ancient tombs. Examples include the “Painting of the Heavenly Horse” in Chonmachong Tomb, as well as various horse-shaped ceramic figures or figurines attached to pottery. As mentioned, these two vessels appear to depict a servant and his master. The servant is carrying a bell, and seems to be leading his master into the afterlife. Supporting this interpretation, the servant vessel was discovered just in front of the master vessel. 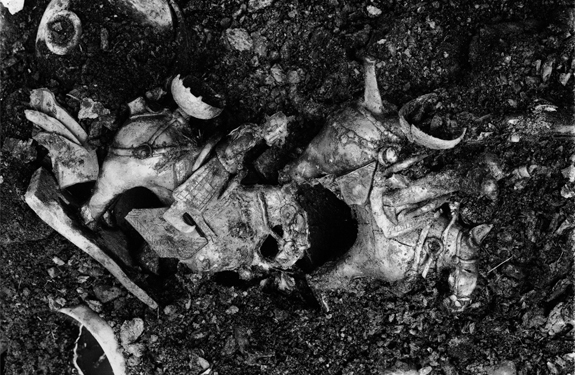 The servant vessel was found in front of the master vessel, as if guiding the master to the heavens.

Below is an X-ray photo of the horse-rider-shaped vessel (i.e., the master), showing its hollow interior. Close examination of this photo reveals a number of other fascinating details. First, look closely at the base of the horse’s body, where the legs were attached. When attaching the legs, the craftsperson would have had to apply quite a bit of pressure, pushing against the body. Thus, we would expect to find that the interior wall had been pushed slightly inward from this pressure, but that is not the case. Thus, it can be ascertained that some type of hard object—likely a cylindrical piece of wood—was placed against the hollow body when attaching the legs. But then, how was the wood removed from the interior of the horse? Again, the answer can be found in the photo, which shows traces of pinching in the area of the horse’s backside. Hence, the wood was probably removed through a hole in the backside, which was then pinched closed. 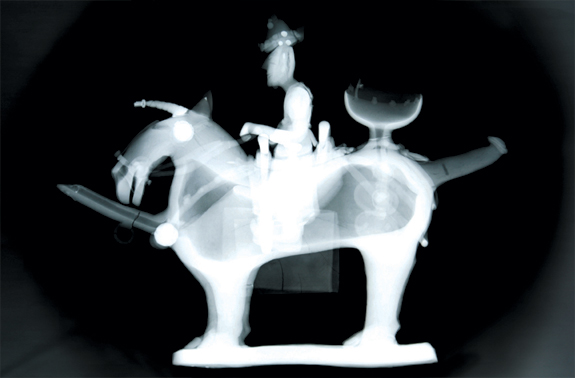 Insights from the Vessel

Now, let’s take a closer look at the horse and its trappings.

Here is the other vessel, which depicts the servant. 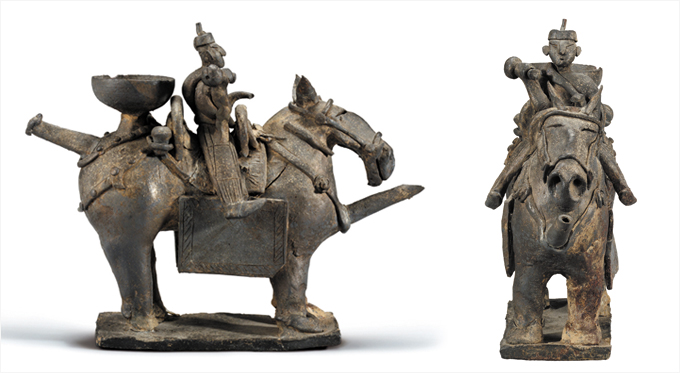