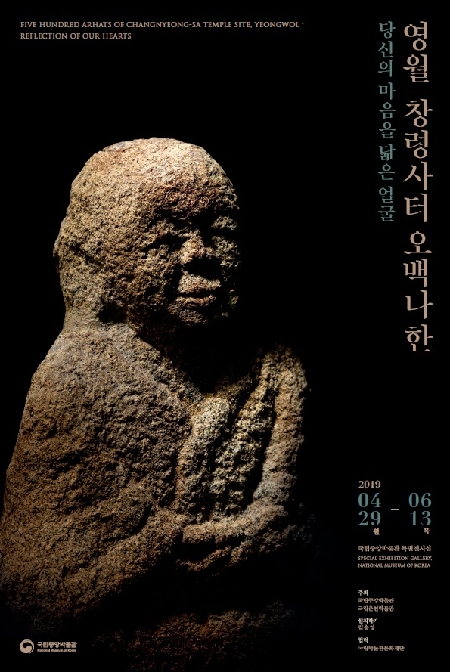 Ever since they were discovered among the ruins of Changnyeongsa Temple in Yeongwol, Gangwon-do Province, the “Five Hundred Arhats” have delighted visitors to the National Museum of Korea (NMK) with their simple, amiable, and lifelike expressions. In Buddhism, an arhat—or “nahan” in Korean—is one who has attained enlightenment. Examining arhat sculptures from a fresh perspective, this special exhibition asks us to encounter these sacred figures as ordinary people.

Before coming to Seoul, Five Hundred Arhats of Changnyeongsa Temple Site: Reflection of Our Hearts was organized and presented by Chuncheon National Museum. As they did in Chuncheon, the endearing arhat sculptures promise to captivate visitors from all walks of life—both scholars and citizens alike—with their irresistible charms. Moreover, the exhibition provides a poignant reminder that each and every one of us is a noble being with the potential to attain enlightenment.

The innovative space for this exhibition was designed and created in collaboration with contemporary artist Kim Seungyoung. Strolling amongst the displays and gazing into the sincere faces, visitors are sure to feel a genuine kinship with these fascinating Buddhist figures.

On display are 90 sculptures of arhats from the ruins of Changnyeongsa Temple in Yeongwol, Gangwon-do, Korea