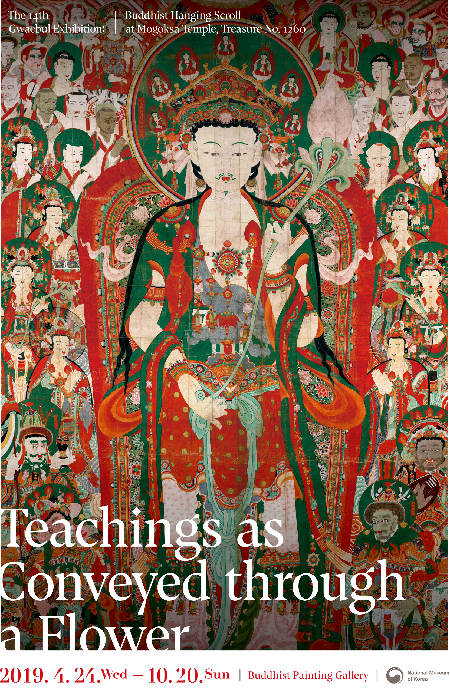 Teachings as Conveyed through a Flower: Buddhist Hanging Scroll at Mogoksa Temple

Famed for its spring scenery and rich history, Magoksa Temple in Gongju houses one of the large Buddhist hanging scrolls, known as gwaebul (掛佛) in Korean. This Magoksa  gwaebul is eleven meters in height and seven in width, and has been designated Treasure No. 1260. Its production was completed in the fifth month of 1687 through the earnest efforts of monks and devotees at the temple. In front of a large crowd standing under glorious sunshine, this image of the Śākyamuni Buddha holding a lotus flower and set against a mandorla adorned with colorful beads and flowers was revealed at Magoksa Temple.


As part of its fourteenth gwaebul exhibition, the National Museum of Korea is recounting the story of Śākyamuni Buddha as he strove to teach not through texts but directly without words. We hope this exhibition provides visitors with an opportunity to carefully view the Magoksa gwaebul that has been admired by many and to better understand the Buddha’s teachings as symbolized by a lotus flower.