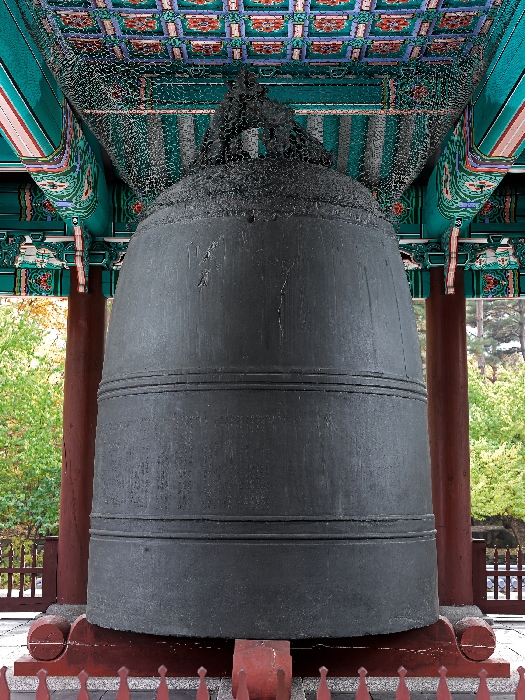 The Bronze Bell of Bosingak Tower was made in 1468 at a Buddhist temple called Wongaksa, which had once been at today’s Tapgol Park in downtown Seoul. The bell was deserted at the temple site for some time even after the temple was closed and dismantled, and it was then moved to Namdaemun Gate and used to announce the time. The bell was then moved to today’s Myeong-dong due to the outbreak of the Japanese Invasions in 1592, and to a bell tower newly built at Unjongga Street (today’s Jongno Sageori) in 1619 to be used to tell time twice a day, the start (28 strikes at 10:00 p.m.) and the end (33 strikes at 4:00 a.m.) of curfew. The name, “Bronze Bell of Bosingak Tower” started to be called since 1895 when the bell tower was named Bosingak. The bell was struck once a year to signal the arrival of the New Year until 1985, when voices were raised for preservation measures for the bell. It was replaced by a new bell in the following year and moved to the National Museum of Korea. The bell is 3.18 meters tall, 2.28 meters in diameter at the mouth, and weighs 19.66 tons. It features typical elements of Joseon bells with a double-dragon loop, without the “sound pipe” at the top, and three boxes of protruded lines arranged on the upper, middle, and lower parts of the outer surface. The surface also has a dim bodhisattva image, which was damaged and looks as if someone intentionally tried to deface it. It has an inscription that gives its date of production and a list of the names and titles of those who participated in building it. It is one of the rare Buddhist bells whose date of production is clearly known before the Japanese Invasions in 1592.