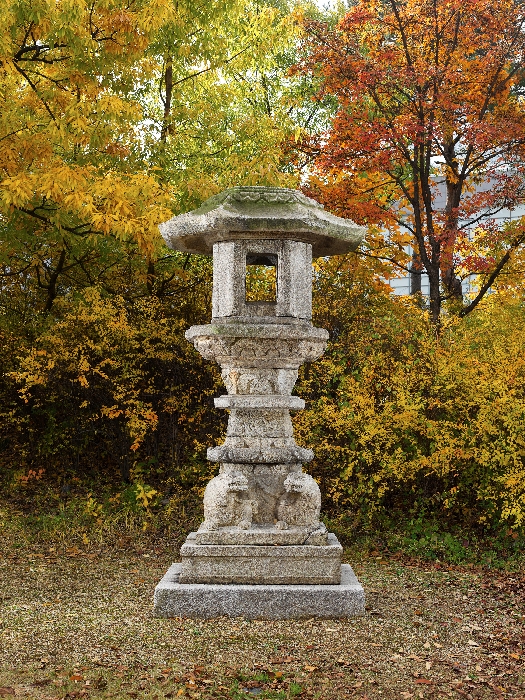 Stone lanterns erected at the edges of a Buddhist temple have the practical function of providing light at night and the symbolic function of enlightening the world with Buddhist law. The lanterns are typically installed at the courtyard in front of a temple main prayer hall and are used for various Buddhist services and other events. The Twin-Lion Stone Lantern from Godalsa Temple Site had originally been in Sanggyo-ri, Bungnae-myeon of Yeoju-gun (present-day Yeoju-si), Gyeonggi-do. The temple prospered between the late Silla and early Goryeo Periods, and became Godalwon, which had become one of the three major Seon (or Zen) centers of Goryeo thanks to Chanyu (869-958), who was admired by the royal family of the dynasty. This Stone Lantern is marked by the “light chamber,” which is supported by a pedestal of twin lion statues. This is unlike the typical Korean stone lanterns in which the light chamber is laid upon the top of the central pillar. Stone lanterns of this type began to appear during the Unified Silla Period where the lions supporting the light chamber are in a standing position, whereas those of the Godalsa Stone Lantern feature the lions in a crouching position. The Godalsa Stone Lantern is characterized by a new, more stabilized structure and form while maintaining the style of the Unified Silla Period.