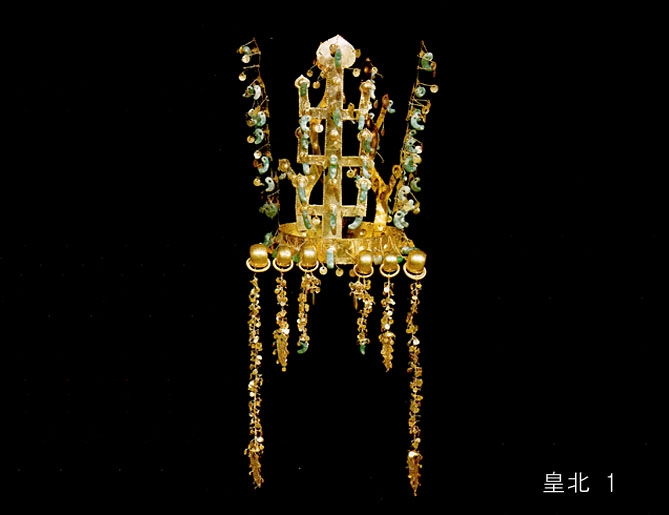 Gold Crown from the North Mound of Hwangnamdaechong Tomb

Hwangnamdaechong Tomb in Gyeongju is a double tomb, with the two individual burial areas attached along a north-south axis. It is believed that a king was buried beneath the South Mound and a queen beneath the North Mound. This gold crown and gold girdle were discovered in the North Mound, and the gold girdle ornament was inscribed “buindae” (夫人帶), meaning “woman’s girdle.” Based on this and other lines of evidence, it was possible to establish that the deceased in the North Tomb was a woman. Gold crowns, along with crown caps and cap ornaments, are not only beautiful treasures; they are highly significant artifacts that can be used to interpret the social and political status of the deceased. This gold crown has three branch-shaped uprights and two antler-shaped uprights, which would be attached to the inside of the crown base with gold nails. The upper and lower boundaries of the crown base are decorated (respectively) with a double line of continuous dot patterns and a single line of wave patterns. Numerous curved pieces of jade are attached to the base and the stems.