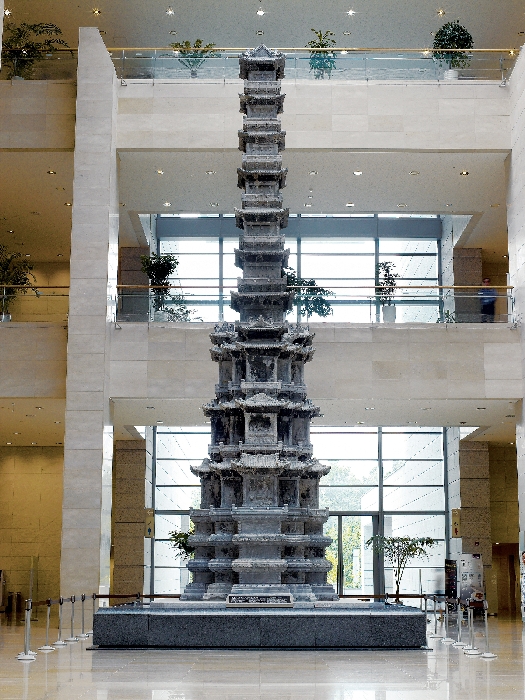 Pagodas were first erected in East Asia after the arrival of Buddhism. Chinese Buddhists usually built brick pagodas, while those in Japan and Korea erected wooden and stone pagodas, respectively. Most Korean stone pagodas were made from granite, but this massive ten-story pagoda is the first one known to be made from marble. It once stood on the grounds of Gyeongcheonsa Temple, located at the foot of Mt. Buso in Gwangdeok-myeon, Gaepung-gun, Gyeonggi-do Province. This pagoda is also extraordinary in terms of its form, which is much more complex than most other pagodas. Its shape is very unusual, with a three-tier base, a complex polygonal shape for the lower part (from the first to the third tier), and a square upper part. The base and the main body are elaborately decorated with carvings of Buddhas, bodhisattvas, and floral designs, and there is an inscription engraved on the body of the first story, stating that the pagoda was built in 1348 (4th year of Goryeo King Chungmok). The eaves of the roof stones reflect the influence of Goryeo wooden architecture, which would later also influence the Ten-story Stone Pagoda at the Wongaksa Temple Site (National Treasure No.2), built during the Joseon Dynasty. This pagoda was taken from its original site and smuggled to Japan in 1907 by Tanaka Mitsuaki, the Japanese Minister of Imperial Household Affairs. It was eventually recovered with the help of two Western journalists, Ernest T. Bethell from England and Homer Hulbert from America, who launched an international press campaign denouncing the theft. The pagoda was reconstructed at Gyeongbokgung Palace in 1960, where it remained until 1995, when it was dismantled to repair serious damage from weathering and acid rain. The exhaustive conservation treatment project took ten years, and in 2005 the restored pagoda was reconstructed at its current location, prominently displayed on the “Path to History” inside the National Museum of Korea.