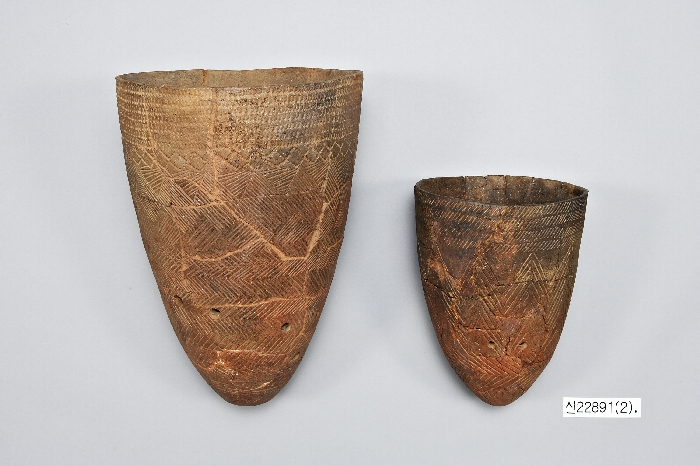 Pottery, one of humanity’s first inventions, is made by combining earth, water, and fire. Before the invention of pottery, food was stored and transported in containers made from wood, reeds, leather, and other organic materials. The invention of pottery made it much easier to store food, but also enabled people to cook their food, which dramatically increased the number and the diversity of things that people could eat. Some of the oldest pottery found in the Korean Peninsula is raised-design pottery (deonmunui togi), which first appeared around 6000 BCE. Approximately 1000 years later, that style was replaced by comb-pattern pottery (bitsalmunui togi), which began in the midwestern region of the Korean Peninsula before quickly spreading to the rest of the peninsula. This particular example of comb-pattern pottery was excavated from the prehistoric settlement site of Amsa-dong, Seoul. It is a simple “V” shaped vessel, with a wide mouth and narrow base, and the entire surface is decorated with engraved lines and dots forming geometric patterns. Experts believe that the designs were made to express the worldview of the Neolithic people who interacted with the natural environment of the Korean Peninsula. Both the form and the decorative motifs that characterize this type of pottery are unique to Korea, and have rarely been found outside of the peninsula. Hence, Korean Neolithic culture is often referred to as the “Comb-pattern Pottery Culture.” The use of comb-pattern pottery, which was so distinctive of the local cultures of ancient Korea, began to dwindle by about 1000 BCE. Ultimately, this type of Neolithic pottery was assimilated with and replaced by the plain, undecorated pottery (minmunui togi) representative of the Korean Bronze Age, which was based on farming.