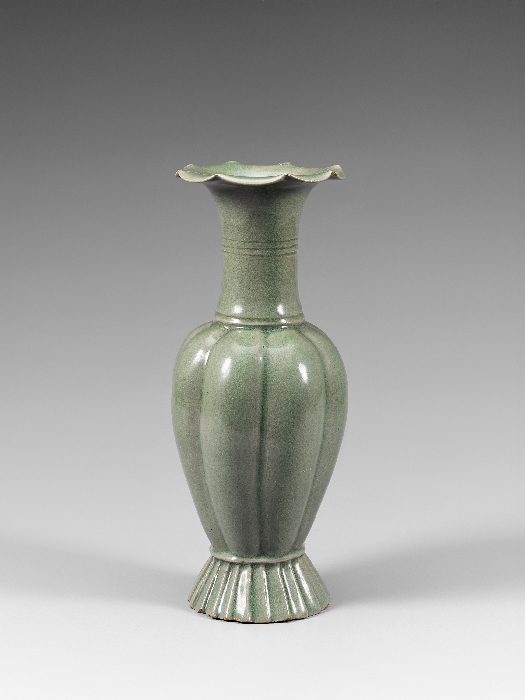 Widely praised for its translucent jade-colored glaze and unique inlay designs, Goryeo celadon ware was first made between the late 9th and early 10th centuries and reached its pinnacle in the 12th century. The celadon works of this golden age are distinguished by the elegant brilliance of their surfaces and the use of a creative new inlay technique, in which white and red slips were inlaid into the surface to form various designs with the contrasting colors. In the mid-13th century, the quality of Goryeo celadon noticeably diminished due to ongoing warfare with the Mongols, as the exquisite jade color was replaced by duller green or yellow-brown surfaces. However, the deterioration of Goryeo celadon ware contributed to the birth of the attractive buncheong ware of the subsequent Joseon Dynasty (1392-1910). This celadon bottle was reportedly handed down from the tomb of King Injong (17th king of Goryeo, r. 1122-1146). It represents the very highest quality of both color and shape of 12th-century Goryeo celadon, and is thus an essential artifact for studying the celadon ware of the period. This style was originally derived from Chinese bronze liquor bottles; it was produced in ceramic form within the Northern Song Dynasty and then transmitted to Korea. While the Chinese versions of this bottle typically have a very large mouth and a voluptuous body, this Goryeo bottle has a perfectly balanced shape, accentuated by the gorgeous glaze.