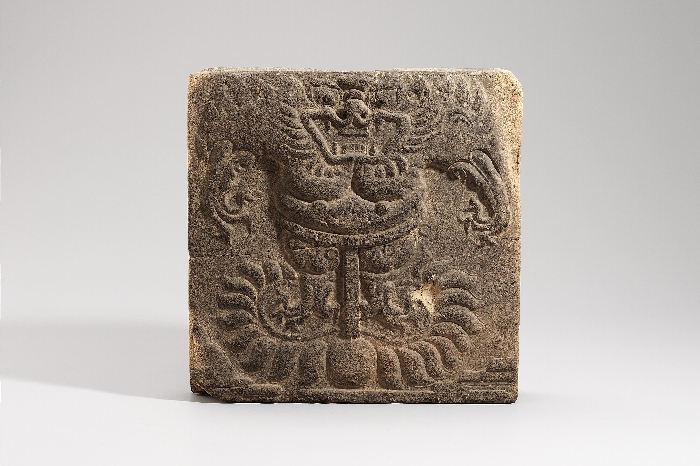 The Baekje Kingdom (18 BCE-660 CE), which was one of the three major kingdoms of ancient Korea, was founded in the middle and lower reaches of the Hangang River. It expanded its territory to the south by establishing rule over areas controlled by the Mahan confederacy. As the kingdom grew, its capital was moved to Ungjin (present-day Gongju) and then Sabi (present-day Buyeo), and Baekje became known for outstanding cultural achievements marked by refinement and elegance, based in part on the kingdom’s active exchange with the Southern Dynasties (420-589 CE) of China. Notably, Baekje culture had a significant influence on the formation of the Asuka culture in Japan. In 1937, excavations began at the site of a Buddhist temple from Baekje’s Sabi Period (538-660 CE), which was located at Oe-ri, Gyuam-myeon, Buyeo. Archaeologists there discovered this set of eight tiles, decorated with landscapes, lotus plants, auspicious clouds, and other images, which had been neatly and evenly laid out on the ground. One of the tiles features a landscape, with a stream in the foreground, rocks with fantastic shapes, and staggered groups of mountains with three rounded peaks. Each peak is topped by pine forests and covered in clouds. The central mountain has a tile-roofed house located mid-slope, and a man who looks like a Taoist sage can be seen walking towards the house. The landscape closely resembles the Peach Blossom Paradise, where Taoist immortals reside.