Today, it is very challenging for us to envision daily life during prehistoric times. With no written records, almost all of our ideas about prehistoric life must be derived from excavated artifacts. In particular, any prehistoric artifacts that feature images are invaluable sources of information. Thus, this bronze ritual object has great significance, since it is decorated with various farming scenes that enable us to visualize agricultural practices from ancient times. 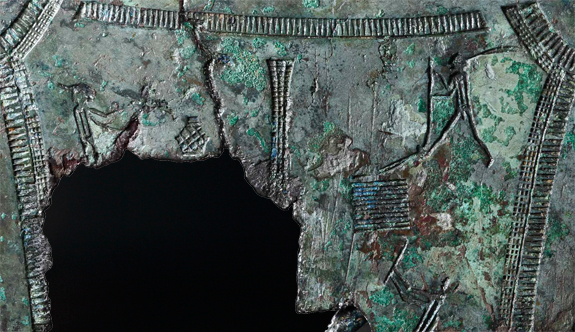 Uniqueness of the Farming Design

A variety of ancient bronze artifacts have been found in Korea, including weapons, tools, and ritual objects. Most of the artifacts that feature decorative designs or patterns are ritual objects, which were used to perform ceremonial rites. In particular, many ritual objects are decorated with geometric patterns of lines and dots, which likely represent the sun, stars, lightning, or other natural phenomenon that were then worshipped with a mixture of awe and fear. These dense and elaborate geometric designs were not merely artistic expressions, but also powerful symbols that were believed to represent and enhance the authority of the leader. However, bronze artifacts inscribed with realistic images are exceptionally rare, limited to one artifact shaped like a pauldron (a shoulder plate on a suit of armor) and a few bronze artifacts that are shaped like split bamboo, which are decorated with images of deer and human hands. Therefore, the discovery of an ancient bronze artifact inscribed with multiple farming scenes was truly unprecedented.

The bronze ritual object with farming scenes has a width of 12.8 cm, although most of the lower section is missing. Along the top of the object are six square holes showing signs of abrasion, indicating that it was likely hung by threading ties through the holes. A decorative frame of incised lines and dots runs around the perimeter and vertically down the center, dividing the surface into panels containing different scenes. In the most intact panel, on the right, a naked man with a feather in his hair plows a field, while another person raises a hoe. In the left panel, a person is putting something into a jar. It is believed that these images represent planting the fields in spring (right) and storing the harvest in jars in the autumn (left).

The reverse side of the object also has decorative panels, as well as a ring shaped like twisted rope attached to a loop. Both the right and left panels on the reverse side feature an image of a bird perched in a tree with two branches. In ancient times, birds were considered to be sacred mediators that flew between the heavens and the earth, connecting shamans with the gods and bringing peace and bounty to a village. Many bird-shaped vessels and bronze artifacts inscribed with bird images have been found at ancient burial or ritual sites. Birds were also prominently featured on sotdae (sacred guardian poles with birds at the top), which were erected to bring peace and prosperity to a village. 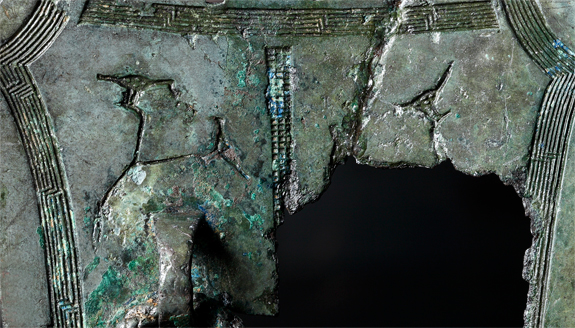 Reverse side of bronze object, with designs of a bird perched in a tree.
Birds were considered to be sacred mediators that linked the heavens and earth, and brought peace and bounty to a village.

Based on the scenes of people using farming tools and the images of birds, this bronze artifact is believed to be a ritual object that was likely used in ceremonial rites to pray for a bountiful harvest. Since the object was not found through excavation, the details of its discovery cannot be confirmed. But based on similarities with other shield-shaped bronze artifacts excavated from Gwejeong-dong, Daejeon, and from Namseong-ri, Asan, the object is estimated to date to the fifth or fourth century BCE. Notably, this is around the time that the “Korean-type Bronze Dagger Culture” began to develop in regions south of the Cheongcheon River. Contemporaneous artifacts that demonstrate the emergence of powerful leaders have been found concentrated in southwest Korea, including at the aforementioned burials of Gwejeong-dong and Namseong-ri, as well as in Dongseo-ri, Yesan. These burials, which consist of wooden coffins covered with stone mounds, have yielded a wide array of bronze ritual objects, including bamboo-shaped, shield-shaped, and disc-shaped ritual objects, in addition to bronze weapons and tools.

The production of bronze objects was a complex and difficult process that involved smelting copper ores, adding alloys (such as tin, zinc, and lead), and casting from molds. As such, bronze items were either symbols of authority or sacred ritual objects, which were only possessed by the most elite members of society. Therefore, the presence of numerous bronze artifacts in a single burial is solid evidence that the deceased was a powerful leader. The presence and nature of bronze artifacts is also indicative of a theocratic society, in which the political leader hosted ceremonial rites. The fact that this bronze object with farming scenes was likely worn or used by the supreme regional leader during rites to pray for the annual harvest demonstrates how important farming was to the society and the subsistence economy of the time.

The importance of farming during the Korean Bronze Age has been confirmed by archaeological materials associated with agriculture, including plant remains, traces of ancient field systems, and farming tools made from stone, wood, and bone. Excavations of some Neolithic sites have uncovered tools that are believed to have been used to harvest foxtail, broomcorn, and barnyard millets, indicating that agriculture began on the Korean peninsula in the Neolithic Age. However, farming only began to be practiced at a wide scale during the Bronze Age. This is evidenced by the discovery of numerous stone farming tools (including semi-lunar stone knives) at Bronze Age sites, along with an increased quantity and variety of crop remains (e.g., rice, barley, foxtail millet, broomcorn millet, sorghum, soybean, red bean, and wheat). The recent discovery of wooden hoes and pestles at waterlogged sites provides further evidence, as does research showing that large Bronze Age villages often included crop fields, rice paddies, and irrigation channels.

Notably, some Bronze Age sites have yielded pottery and the remains of field systems that resemble the images depicted on this ritual object. The rendering of the field also recalls the ridges and furrows of an actual Bronze Age field that was discovered in Daepyeong-ri, Jinju. In addition, large storage vessels found at various sites (e.g., Sangchon-ri, Jinju; Cheonjeon-ri, Chuncheon; and Yeonha-ri, Gapyeong) show traces of crosshatch patterns, suggesting that they may have been transported or affixed with some type of mesh or net. These vessels have a narrow mouth and round body, reminiscent of the jar depicted in the left panel on the bronze ritual object. 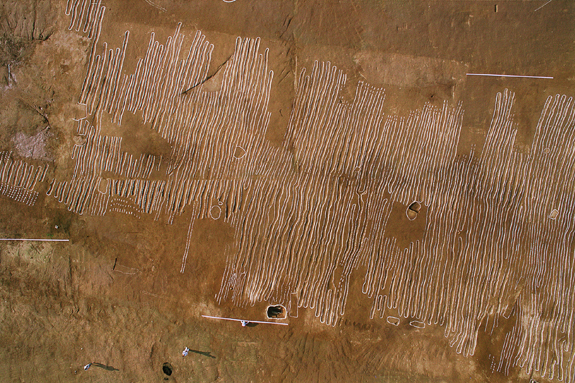 Bird’s-eye view of a Bronze Age field discovered in Daepyeong-ri, Jinju.
The ridges and furrows of the field resemble the field depicted on the bronze ritual object.

For years, the nude man plowing the field in the right panel of the bronze ritual object with farming scenes was the subject of great curiosity among scholars. But new light was shed on this mystery in 2004, while Yi Kun Moo was the Director of the National Museum of Korea. That year, the National Folk Museum published Collection of Materials about Korean Seasonal Customs: Early Joseon Writings. This compilation featured an article by the Joseon scholar Yoo Hee Choon (1513-1577) entitled “Discussion of Nude Plowing on Ipchoon ,” originally found in Collected Writing of Miam Seonsaeng (Volume 3). In the article, Yoo Hee Choon discusses “ nagyeong, ” a seasonal tradition that took place on “ ipchoon ” (立春), the first morning of spring, in which a nude person with a wooden cow simulated planting, sowing, and harvesting the field, in order to predict and pray for a bountiful harvest. Yoo notes that this ritual was still taking place in northern regions, such as Hamgyeongdo and Pyeongando Provinces, and calls for it to be banned.

The bronze ritual object with farming scenes is an invaluable artifact for our understanding of the Korean prehistoric period, demonstrating the advancement of bronze production technology, the development of farming, the practice of rituals, and the nature of society at the time.