In 1971, some villagers in Daegok-ri, Hwasun, South Jeolla Province were working on an irrigation canal when they came across some strange metal objects with a bluish hue. They gave the metal objects to a peddler, who fortuitously identified them as ancient artifacts and (after some deliberation) contacted the Provincial Office of South Jeolla Province. Four months later, excavations were carried out in the area where the bronze artifacts had been discovered. These investigations uncovered the remnants of a burial structure, consisting of a two-tiered pit packed with stones surrounding a log coffin. 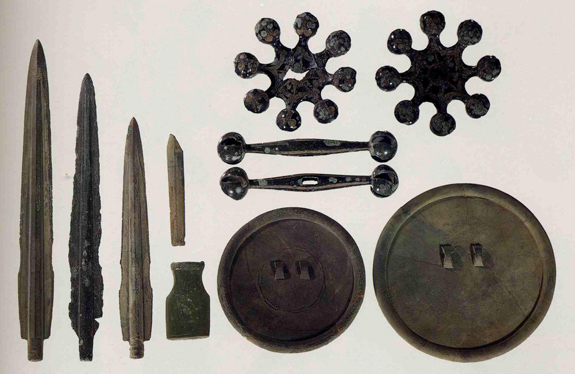 Collecting the Bronze Artifacts from Daegok-ri

A total of eleven bronze artifacts were originally found in Daegok-ri: three Korean-type bronze daggers, one bronze axe, one bronze engraver, two bronze mirrors with fine linear designs, two hand bells with eight arms, and two double-headed bells. The year after its discovery, this surprisingly large set of objects was designated as National Treasure 143. By February 2008, the conditions of the Daegok-ri site had deteriorated, so Gwangju National Museum decided to perform some maintenance and conduct new excavations. The original excavation in 1971 had been conducted rather hastily, with the goal of simply retrieving any objects that remained. Thus, various parts of the site, including the area beneath the wooden coffin, had never been thoroughly investigated. Towards the end of these new excavations, two more Korean-type bronze daggers were found on the southern section of the floor of the burial pit. Hence, for the first time in thirty-seven years, the entire set of grave goods was once again re-assembled.

The bronze artifacts from Daegok-ri are now the representative objects of “Korean-type Bronze Dagger Culture,” which spread through regions south of the Cheongcheon River starting around the fifth century BCE. The time period of this culture is known as either the Late Bronze Age or Early Iron Age, since iron objects first appeared in the Korean peninsula around this time. In particular, Korean-type Bronze Dagger Culture is represented by weapons, including Korean-type bronze daggers (with straight blades), spearheads, and dagger-axes, as well as by ritual implements, including different types of bells.

As compared to the preceding period, Korean-type Bronze Dagger Culture saw an increase in the quantity, quality, and diversity of bronze artifacts. Moreover, the bronze objects that newly emerged demonstrated advanced technology and craftsmanship, as exemplified by bronze mirrors with fine linear designs. These mirrors, which developed from earlier bronze mirrors with coarse linear designs, have two knobs on the back, encircled by linear geometric patterns that cover the entire surface.

Two bronze mirrors with fine linear designs from Daegok-ri. Each mirror is covered with geometric patterns that represent the apex of bronze-production technology at the time.

The two bronze mirrors with fine linear designs that were found at Daegok-ri have diameters of 18cm (#1, left) and 15.6cm (#2, right). Each mirror has different designs in its inner, central, and outer panels. On both mirrors, the primary motifs are triangles densely shaded with tiny diagonal lines (2-3 lines per 1mm), but the mirror on the left (#1) also features concentric circles. Similar concentric lines can also be seen on other bronze mirrors with fine linear designs, including sthe one designated as National Treasure 141 and one found at the site of Soso-ri, Dangjin. It is believed that these mirrors were intended to symbolize the sun, as the shaded triangles along their edges seem to represent sunbeams.

Who Used These Daggers and Mirrors?

Looking at these exquisite bronze artifacts today, so many questions come to mind. Who made them? Who used them? What were they used for?

Bronze is an alloy that is made by adding tin (or sometimes lead or zinc) to copper in order to enhance the strength and quality. The production of bronze objects required smelting certain ores, mixing the molten metals according to a specific recipe, and then pouring the mixture into a mold. After being removed from the mold, the objects were finished by using a whetstone to grind their edges, sharpen their blades, or refine their shape. Requiring such complex and delicate processes, ancient bronze objects must have been precious treasures that could not have been possessed by all members of society.

Korean-type bronze daggers and bronze mirrors with fine linear designs have typically been found at burial sites, alongside various grave goods, including jade beads and pottery. The Daegok-ri artifacts were discovered at a “wooden coffin with stone cairn” burial, which consisted of a double-tiered pit containing a wooden coffin, which had been covered with stones. To date, in fact, all of the sites where numerous bronze artifacts representing the Korean-type Bronze Dagger Culture have been excavated have been wooden coffin with stone cairn burials. Prior to such wooden coffin burials, the prevalent type of burial was dolmens, which served as both burials for elite members of society and communal monuments. Unlike dolmens, however, wooden coffin with stone cairn burials were intended to contain only a single person. The fact that the burial pits were dug deep into the ground and furnished with numerous bronze objects of the highest quality indicates that strong individual leaders had emerged. Rather than being simply grave goods, bronze daggers and mirrors were likely possessed and used by the deceased during his or her lifetime. Unlike the earlier Liaodong-type bronze daggers (which had a curved lute-shaped blade), Korean-type bronze daggers are believed to have served a practical purpose as weapons or cutting tools, in addition to representing the owner’s authority. This is evidenced by their sharp, straight-edged blades and relatively high copper composition (70-80%).

As compared to bronze daggers, the bronze mirrors and other ritual implements, such as bronze bells, usually contain a higher percentage of tin. Notably, tin reflects more light than copper, and also provides a clearer sound when struck. It is believed that bronze mirrors were ritual implements that were used to reflect sunlight during ceremonies and rites, rather than for looking at one’s own reflection.

What is the meaning of the daggers and mirrors that were buried with the individuals who once ruled society? Research indicates that bronze daggers represented the political authority of the ruler, while bronze mirrors represented the ritual authority of the head priest. Taken together, these items provide strong evidence of a theocracy (a form of government in which priests rule in the name of a deity). In the Bronze Age, as farming came to be practiced on a wide scale, people began to congregate and form large villages. This sedentary way of life would have precipitated the emergence of powerful rulers who could arbitrate both intra- and extramural conflicts, make decisions on behalf of the community, and conduct rituals for peace and prosperity.

Where in southern Korea did these powerful rulers first appear? The site of Daegok-ri provides an important clue to answering this question. Daegok-ri is located in the southwestern part of the Korean peninsula, which is where many of the earliest examples of artifacts representing the Korean-type Bronze Dagger Culture (such as bronze weapons and ritual implements) have been found. Thus, it is estimated that the increased social stratification and emergence of political entities first took place in this region of Korea.