The excavation of the Tomb of King Muryeong in Gongju in 1971 was truly a watershed moment in the history of Baekje research. Approximately 4,600 artifacts were recovered during the excavation, highlighted by four gold crown ornaments that are now considered to be the representative artifacts of the tomb. In the tomb, the two pairs of crown ornaments had been placed at the head of the king and the queen (respectively). 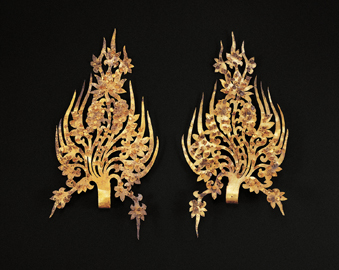 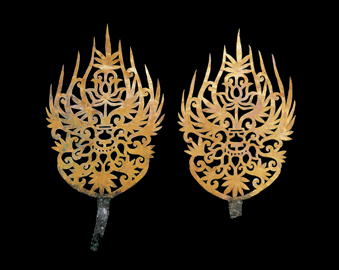 The king’s crown ornaments (National Treasure 154) are made from thin sheets of gold cut in the shape of rising flames, with openwork patterns of honeysuckle flowers that converge towards the center. Adding to the splendor, the surface is covered with tiny round spangles that were attached with gold thread. The queen’s crown ornaments (National Treasure 155) also feature flame and honeysuckle designs, but they differ from the king’s ornaments in terms of the shape and composition. Firstly, the queen’s ornaments show bilateral symmetry and they were not adorned with any spangles. Also, unlike the king’s ornaments, the queen’s ornaments have a central design of a vase containing a blooming flower, resting on a pedestal decorated with seven lotus petals.

According to written sources, the Baekje king wore a black silk cap decorated with gold flowers, while members of the government who were ranked nasol (奈率, i.e., sixth rank) or higher wore black silk caps with silver flowers. Thus, based on the written records and the location of the site, it is estimated that these crown ornaments would have been inserted into black silk caps.

Information about Baekje clothing and accessories, including crown ornaments can be found in various historical texts. For example, in the “Accounts of King Goi” in the Baekje Annals (百濟本紀) of Samguk Sagi, it says:

“In the second month, it was decreed that those who are sixth rank or higher should wear purple clothes and caps with silver flowers, while those above eleventh rank should wear crimson clothes, and those above sixteenth rank should wear blue clothes. On the first day of the first month of the twenty-eighth year of his reign, the king sat in the South Hall and governed while wearing purple robes with wide sleeves and blue silk trousers, a black silk cap adorned with gold flowers, a white leather belt, and black leather shoes”
(二月下令六品已上服紫以銀花飾冠十一品已上服緋十六品已上服靑 二十八年春正月初吉王服紫大袖袍靑錦袴金花飾烏羅冠素皮帶烏韋履坐南堂聽事).

Similar accounts can be found in texts such as Jiutangshu (舊唐書), Xintangshu (新唐書), Suishu (隋書), and Beishi (北史). The latter text, for example, states that, “The clothing of Baekje roughly resembles that of Goguryeo. Caps with wings attached to the sides were worn when bowing at court or carrying out rituals, but the wings were not attached during warfare” (其飮食衣服 與高麗略同 若朝拜祭祀 其冠兩廂 加翅 戎事則不). Such records have prompted speculation that Baekje may have adopted the tradition of bird feather caps, like those seen in Goguryeo tomb murals.

The Tomb of King Muryeong (武寧王, r. 501-523), the twenty-fifth king of Baekje, is the only royal tomb of the Three Kingdoms in which the deceased can be positively identified. It is located in the Songsan-ri Burial Ground in Geumseong-dong, Gongju, which contains more than twenty Baekje royal tombs (seven of which have been reconstructed). Of these, Songsan-ri Tomb 6 and the Tomb of King Muryeong are brick tombs, featuring main burial chambers with arched ceilings and attached corridors, showing the influence of the Southern Dynasties of China.

The Tomb of King Muryeong was discovered by accident in July 1971, while workers were repairing the drains of Songsan-ri Tomb 6. As soon as the tomb was discovered, emergency excavations were conducted. Approximately 4,600 artifacts were recovered from the tomb, including epitaph plaques containing information about the deceased, diverse gold and silver ornaments, bronze mirrors, and Chinese ceramics. To date, seventeen of these artifacts have been designated as National Treasures because of their significant historic and artistic value. In particular, some of the artifacts from the Tomb of King Muryeong are associated with the Southern Dynasties of China, whereas others provide compelling evidence of international exchange between Silla and Wa (from Japan), exhibiting the wide dissemination and open nature of Baekje culture.

According to the Baekje Annals of Samguk Sagi,“Those officials who are sixth rank (nasol, 奈率) or higher used silver flower decorations.” Confirming this record, flower-shaped decorations cut from sheets of silver have been recovered from stone-chamber tombs with corridor entrances in Buyeo (Hahwang-ri, Yeomchang-ri, and the Neungangol Burial Ground in Neungsan-ri); Naju (Boksam-ri); and Namwon (Cheokmun-ri). These ornaments, which once adorned the caps of government officials, are usually symmetrical and are fairly standardized in shape. They consist of a long silver stem that is bent lengthwise into an “V-shaped” channel, with flower-shaped branches emerging from both sides.

Excavations of Tomb 36 at the Neungangol Burial Ground in Neungsan-ri, Buyeo uncovered an iron frame shaped like an upside-down triangle, along with a silver cap ornament. This iron frame is believed to be the remains of a cap to which ornaments would have been attached. Two people were interred together in Tomb 36: a man on the east side and a woman on the west side. The silver cap ornament, which has four side branches (two on each side), was discovered near the remains of the man. The iron frame was wrapped in several layers of cloth, which analyses later showed to be plain weave fabric and silk. Hence, this discovery provides valuable evidence that these silver accessories were worn with a silk cap, as described in the aforementioned historical texts. 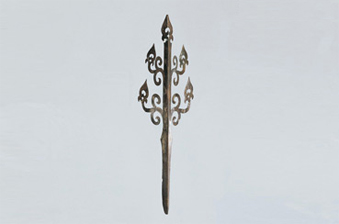 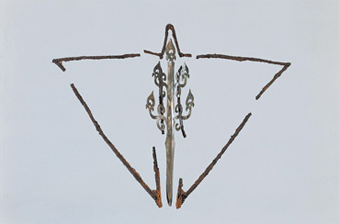 Baekje crowns and crown caps, which were worn to symbolize power and authority, have primarily been found in the tombs of elite members of society. Gilt-bronze crown caps have been discovered at Suchon-ri (Gongju), Bujang-ri (Seosan), Yongwon-ri (Cheonan), Ibjeom-ri (Iksan), Sinchon-ri (Naju), and Gildu-ri (Goheung). They have also been found in areas outside of Baekje territory, including in the regions of Gaya and even Japan. Baekje gilt-bronze crown caps are shaped like an arch with a tubular attachment extending from the back. Ornamental accessories would also have been attached to the front and back of the cap. Such gilt-bronze crown caps have frequently been found alongside gilt-bronze shoes, swords with ring-shaped pommels, and Chinese ceramics.

Gold crown ornaments and silver cap ornaments were fitted into crown caps and other caps. It is estimated that variations in the ornaments symbolized different levels of authority, thus expressing the stratification of Baekje society. For example, the gold crown ornament from the Tomb of King Muryeong is regarded as a representative symbol of the king’s authority. 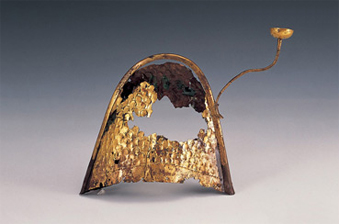 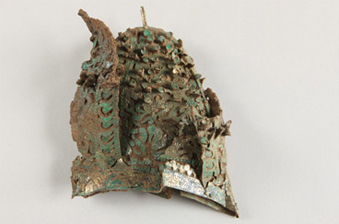