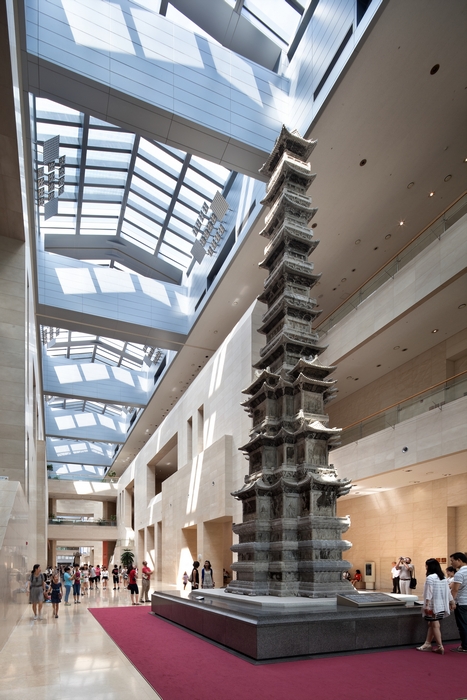 Made of marble, this ten-story stone pagoda was erected at Gyeongcheonsa Temple in Gaeseong in 1348, the fourth year of the reign of Goryeo’s King Chungmok. The first tier of the pagoda bears an inscription that records various details about the pagoda’s production, including the production date and the patrons. According to the inscription, the pagoda was sponsored by Goryeo people who were associated with China’s Yuan Dynasty. Notably, this stone pagoda was closely modeled after wooden architecture, and each story is expertly carved with Buddhist images. The platform is sculpted with scenes of Xiyouji (Journey to the West), as well as lions, dragons, and lotus flowers. The lower four stories are sculpted with scenes of Buddha’s Assembly, while the upper six stories are sculpted with images of Buddha with both hands clasped. The four sides of the platform and those of the lower three tiers are protruding, recalling the shape of Tibetan-Mongolian pagodas that were prevalent in the Yuan period. However, the upper seven tiers have a more standard rectangular shape that corresponds with the conventional form of stone pagodas. Notably, about 120 years after this pagoda was built, the Joseon royal court erected a stone pagoda with a similar material and shape at Wongaksa Temple in Gwangju. In 1907, this pagoda was illegally dismantled and smuggled to Japan by Tanaka Mitsuyaki, the Japanese Minister of the Imperial Household. However, thanks in part to the efforts of a British journalist named Ernest Thomas Bethel and an American journalist named Homer Hulbert, it was returned to Korea in 1918. The pagoda was partially restored in 1960, while it was being kept at Gyeongbokgung Palace, but after having been kept outside for so long, suffering the effects of weather and acid rain, it could not be properly preserved. Thus, in 1995, it was dismantled for a more extensive restoration project. Ten years later, it was reassembled inside the new building of the National Museum of Korea in Yongsan, being unveiled as part of the museum’s grand opening in 2005.