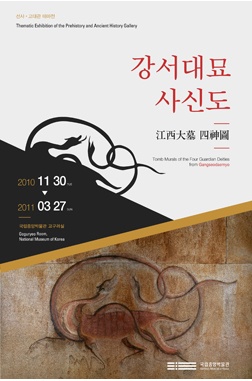 Tomb Murals of the Four Guardian Deities from Gangseodaemyo

The Four Guardian Deities are a pantheon of four divine beasts; namely, the Blue Dragon, the White Tiger, the Red Phoenixes and the Black Tortoise and Serpent. The Four Guardian Deities are gods believed to be related to the four cardinal directions, the four seasons as well as the twenty-eight major constellations, and are said to ward off evil influences and ensure the harmony of yin and yang energies. They made their official appearance in burial structures some time during the Han Dynasty of China. Initially, they were represented on the walls of a main chamber, amongst other divine beasts. Their representation and the popular perception of them underwent changes, depending on the region as well as the period of time. But, their importance was significantly diminished once into the Tang Dynasty.

The Four Guardian Deities were introduced to the Korean peninsula, presumably during the Three Kingdoms period. At any rate, they first appear in Goguryeo tomb murals. In 5th century Goguryeo tombs, the Four Guardian Deities were portrayed as symbols of the afterlife, mostly on the ceiling of a main chamber, alongside the sun, moon, constellations, lotus blossoms and other sacred beasts. No set practices existed concerning their representation and position, and the Four Guardian Deities, in tombs of this period, were often strange and awkward looking. At times, they were depicted in pairs, and at other times, one or more of them were omitted.

These initial irregularities were gradually ironed out, as a common, collective perception of the Four Guardian Deities replaced their initially varying notions. Their representations became more sophisticated as well as natural over time, to more successfully convey the sacredness of these divine beasts. From the 6th century and onwards, the Four Guardian Deities progressively gained importance in Goguryeo’s burial culture, as tomb mural motifs, to eventually become the only theme of main chamber murals. This transition marked the shift through which the Four Guardian Deities were no longer simple motifs representing the afterlife among many other such motifs, but rose to the status of guardians of a tomb.

Goguryeo people believed that the life they led in this world would continue in the world after death. That is why they used mural paintings to try to create a similar living environment in the interior of a tomb, hoping that the deceased could continue their life in the same manner as they had lived in this world. At the same time, they also thought that the next world would be completely different from this world, as can be seen in the murals themselves, which depict a heavenly world inhabited by all kinds of divine beings.

On the other hand, ancient East Asian people believed that the soul of a human being consisted of two different, though closely related, forces : hon and baek. Death then meant separation of the two forces from each other, with hon traveling back to the heavenly world and baek going on to the underworld. The murals are a symbolic expression of the two worlds, one inhabited by hon and the other by baek after their separation following the death of a human being. It was during the period when the world after death was perceived both as real and transcendental worlds that the Four Guardian Deities began to appear on the walls and the stones supporting the ceiling of a main chamber as divine beings representing constellations forming the heavenly world and the guardians of four cardinal directions. After the 6th century, however, the Four Guardian Deities came to play a central role as protectors of a tomb, reflecting the fact that, for the Goguryeo people in this period, the world beyond was a more unreal, abstract and homogeneous one.

Gangseodaemyo is located in Sammyo-ri Gangseo district in Nampo City. The tomb faces south and the chamber was built over ground. It is a single-chamber tomb composed of corridor and main chamber. The walls and ceiling corbel of the chamber were made with huge finely trimmed granite stones. The main chamber walls were built up by piling slabs and by cutting the top surfaces of the slabs in slant direction, the walls were designed to taper upwards. Murals were painted immediately onto the surface of the stone walls and the theme is the Four Guardian Deities. The Deities on the main chamber walls are huge enough to cover the entire wall, having no background images. Especially the Black Tortoise and Serpent scene shows a high degree of artistic perfection, hence, attracting public attention since the time of initial research. Considering that the tomb has a typical single-chamber tomb structure, that murals are mainly on the Four Guardian Deities, and that the expressional technique of the Four Guardian Deities has reached its peak, Gangseodaemyo is presumed to have been built in the late sixth century.

This is the replica of the Blue Dragon painted on the east wall of the main chamber. The Blue Dragon is descending towards the south with its left foot taking a giant step. A massive body, a lean neck in an ‘S’-shape, a tail shaped like a staircase yet extended elegantly and four legs stretched out properly are harmonized well together, making the figure look natural and powerful. Resplendent colors and meticulous details on every part of the body are also remarkable. The Blue Dragon is the symbolic guardian of the east, and has been admired along with the White Tiger as a protector against all evil forces. The archaeological findings show that these animals had already begun to be regarded as guardians of the dead some 6,000 years ago.

This is the replica of the Black Tortoise and Serpent painted on the north wall of the main chamber. The tortoise and the serpent face each other, gazing diagonally in the air, are transmitting flame-like energy gushing out from their mouths. The motion created by the tortoise’s body and the lithe movement of the serpent’s body are orchestrated together, reincarnating two entities into a mystical existence.

As the guardian of the north, the Black Tortoise and Serpent was, along with the Red Phoenixes, responsible for maintaining the harmony between yin and yang, the two opposing cosmic forces. The concept of the animal is known to have originated before the Han Dynasty, but the shape we recognize today, which is marked by the unity between a tortoise and a serpent, first appeared during the period, although the tradition of depicting it as a single tortoise continued into subsequent periods.

This is the replica of the male and female Red Phoenixes on the south wall of the main chamber. They are painted gazing at the gate with wings spread almost like a full circle. The area around the gate is decorated with honeysuckle patterns. The wide-open eyes, a long head feather stretched out on its back, body and neck forming an ‘S’-shape, fully spread wings and three strands of tail feathers rolled up in a shape of semicircle-these are the expressions that add vigor and energy to the Phoenixes. Each Red Phoenix is holding on its beak a lotus bud wrapped with a honeysuckle leaf. Mountains are painted under the legs of the Red Phoenixes. The Red Phoenix is a mythical bird which ancient East Asian people believed to be the guardian of the south and, along with the Black Tortoise and Serpent, responsible for the harmony between yin and yang.

This is the replica of the White Tiger painted on the west wall of the main chamber. The tiger is roaring and rushing toward the gateway on the west wall of the main chamber. Its form and basic posture are almost the same as that of the Blue Dragon. The unique characteristics of the White Tiger that make the distinction are the counter-”S” form created by the position of the neck and body that looks almost vertical, the simplified form of body, and legs that look relatively thinner. As the guardian of the west, it was regarded, along with the Blue Dragon, as a divine being capable of repelling evil forces.