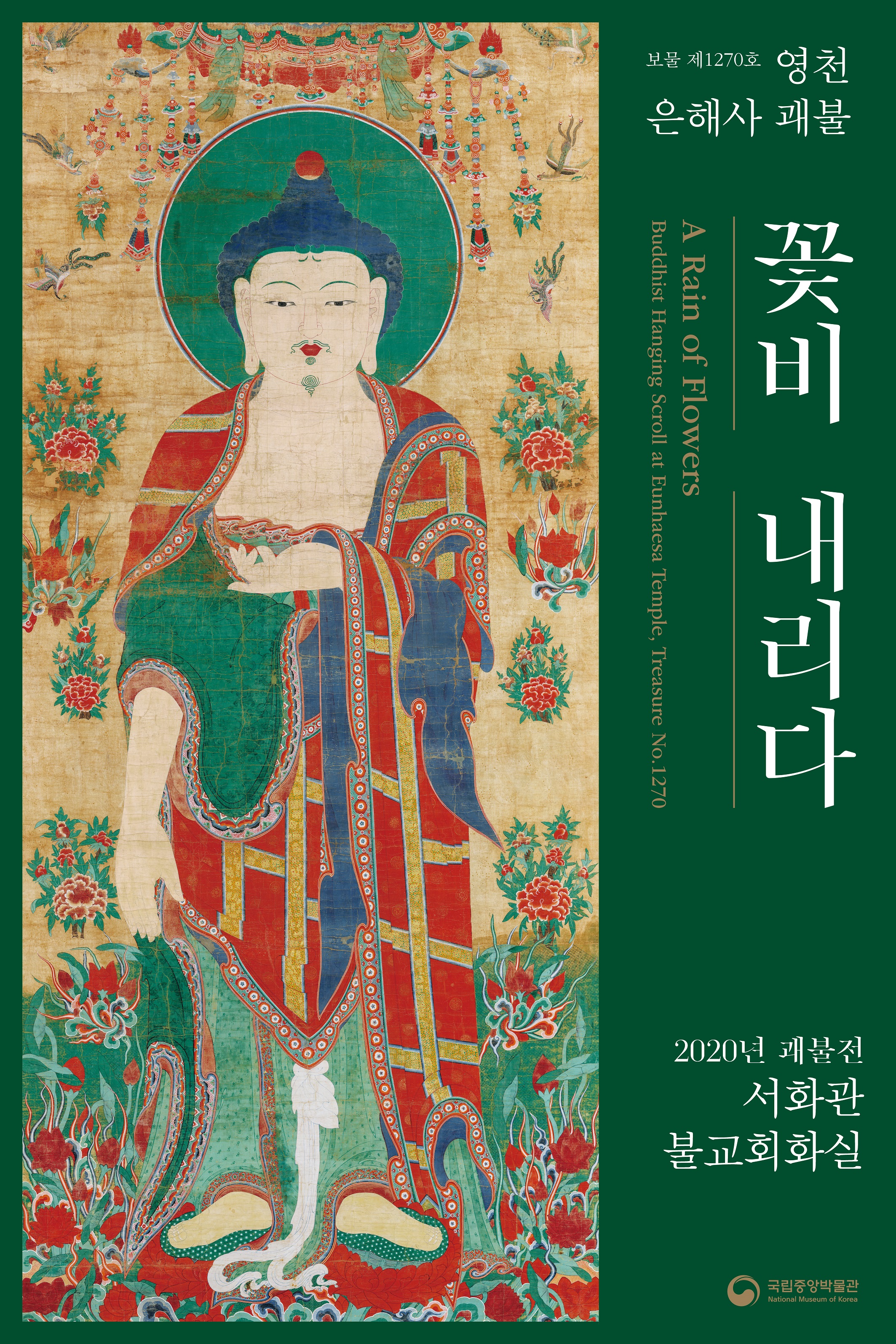 A Rain of Flowers: Buddhist Hanging Scroll at Eunhaesa Temple

A Rain of Flowers: Buddhist Hanging Scroll at Eunhaesa Temple

The National Museum of Korea is pleased to present the exhibition A Rain of Flowers: Buddhist Hanging Scroll at  Eunhaesa Temple to celebrate Buddha’s Birthday in 2020. It introduces a gwaebul (large-scale Buddhist hanging scroll for outdoor rituals) enshrined in Yeongcheon at Eunhaesa Temple, a beautiful retreat often shrouded in layers of silvery fog cresting like ocean waves.

With spring in the air in the fourth month of 1750, production was completed of a large-scale Buddhist painting to be hung at outdoor rituals at Eunhaesa Temple on the eastern foot of Palgongsan Mountain. When the more than 11-meter hanging scroll was unrolled, crowds of people came to observe this Buddha standing alone amidst a rain of flowers. Who was the Buddha that people encountered? It is believed to be Shakyamuni Buddha preaching a sermon at Vulture Peak. However, the background against which the Buddha is set is dripping with flowers and colorful birds, something more reminiscent of Amitabha Buddha’s joyful paradise. The flowers depicted in the Eunhaesa gwaebul appear like offerings sprinkled about in admiration of Shakyamuni’s teachings or the flower rain that falls from the sky of Amitabha’s paradise.

In April 2020, the story of the Eunhaesa gwaebul will be unfolded. The painting Shortcut to Rebirth in the Pure Land by Chanting the Name of Amitabha, which illustrates Amitabha Buddha and his splendid pure land, will be also featured in the Buddhist Painting Gallery until August 23. It is hoped that visitors will be drenched by this shower of flower rain and become imbued with appreciation for this Amitabha while experiencing the fifteenth gwaebul presentation at the National Museum of Korea.


○ Displayed objects: Buddhist Hanging Scroll at Eunhaesa Temple (Treasure No. 1270), painting of Shortcut to Rebirth in the Pure Land by Chanting the Name of Amitabha  (Treasure No. 1857; on display until August 23), and others