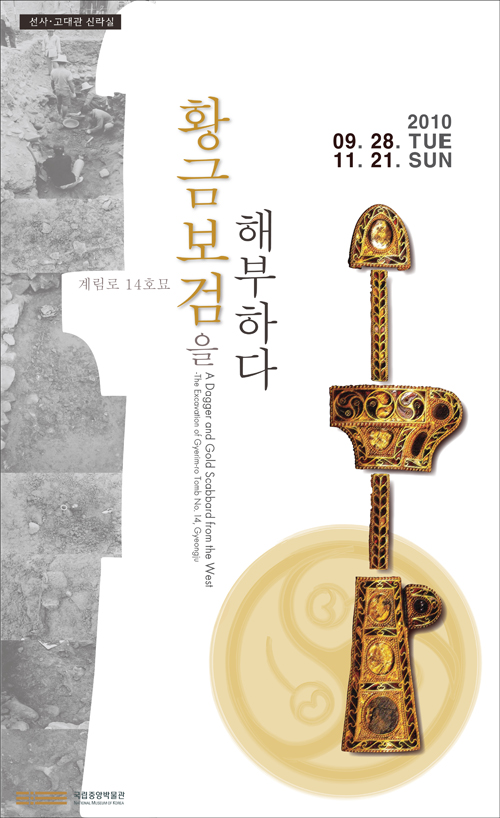 A Dagger and Gold Scabbard from the West: The Excavation of Gyerim-ro Tomb No. 14, Gyeongju

During the construction of Gyerim-ro road to the east of Daereungwon in 1973, 55 Silla tombs, including jar coffins and wooden chamber tombs with a stone mound, were discovered. One of these was named Gyerim-ro Tomb no.14, which became the center of attention when a gold dagger was excavated from there.

Not all of the excavated articles of Gyerim-ro Tomb no.14 were exhibited, but after 5 years of organization and arrangement, new facts about this Silla tomb have been revealed. With thorough observation and analysis, it has now become possible to get closer to the truth surrounding gold dagger. Based on this discovery, we will try to answer the question regarding the owner of the gold dagger.

Who was the person with the gold dagger that was buried here 1,500 years ago?

Dissecting the Dagger and Gold Scabbard

Red jewels, which are garnets, were inlaid into the gold surface of the dagger hilt and scabbard, thereby enhancing their brilliance. Inlaid glass pieces were also used as decoration. Similar artifacts decorated with garnets and glass inlaid in gold have been found at a tomb in Borovoye, Kazakhstan and at Taganrog, located on the coast of the Sea of Azov which forms the northeastern extension of the Black Sea.

How was it worn?

Swords in the Silla kingdom were worn so that they hung vertically, at a slight angle, beside the leg. However, it was revealed that the dagger from Tomb No. 14 was worn in a nearly horizontal fashion. During excavation, a belt was found lying slightly above the dagger indicating that the latter may have been attached to the former and worn at the waist.

The gold dagger differs significantly from other Silla swords in terms of its form, manufacturing technique, and the way it was worn. This indicates that it was a foreign import. Similar daggers have been found at a tomb in Borovoye, located in Kazakhstan, Central Asia. They have also been observed in the murals of the Kizil Caves at Xinjiang, China, and the murals of Afrasiab Castle located in Samarkand, Uzbekistan. It therefore appears that this type of dagger was popular in the Black Sea region of Central Asia.

Who are they in the tomb?

The owner of the dagger and scabbard from Gyerim-ro Tomb No. 14 was buried in a wooden chamber burial covered with a stone mound. Two pairs of earrings were discovered on the floor of the burial chamber where the deceased would have been laid to rest. The positioning of the earrings and the fact that human teeth were found in between each pair suggests two individuals were buried side by side. The owner of the gold dagger was two individuals on the left. Both appear to have been individuals of high status. There may be several reasons why the two were buried together in this way. Perhaps they had died together in an epidemic or maybe they were comrades killed together during combat.

The gender and age of the owner

The types of ornaments worn by the deceased may provide clues regarding gender. Both of the individuals buried in the tomb appear to have been males who wore thin earrings, one carrying a sword and the other the dagger. Then how old was the owner of dagger? Based on the positioning of the earrings, teeth and belt, his height can be estimated to somewhere between 150 to 160 centimeters. It is therefore likely that the deceased was a grown man rather than a child.

The status of the owner

Imported items such as the dagger and gold scabbard were symbols of wealth and power. The various gold and silver artifacts and glass ornaments found within the tomb also indicate that the owner was an individual of high status. In addition, the deceased's clothes may provide more concrete information regarding his status. Fabric was found attached to the back side of the scabbard. It appears to have come from the deceased's outer garment, which was identified as being of silk. Silk was only worn by people who belonged to the rank of Jingol ('true bone'), which represented the highest aristocratic class of the Silla kingdom, or above.

Was the dagger's owner originally from West Asia?

As the dagger was an imported item, the owner might be a foreigner. However, imported foreign goods do not necessarily represent the movement of people. In the case of Gyerim-ro Tomb No. 14, all of the artifacts apart from the dagger and scabbard were manufactured in the Silla region. The type of tomb structure was also greatly used in the Silla kingdom. Moreover, the orientation of the deceased, with his head positioned towards the east, was a tradition of Silla. Therefore, it is likely to say that the owner of the dagger was from Silla and not a foreigner.