The Silla Kingdom developed into an ancient state in the mid-fourth century, which saw the appearance of a central ruler called the “Maripgan;” as such, this period of Silla is now known as the “Maripgan phase.” The Maripgan phase is well documented by evidence from the distinctive tombs of the period, which feature a wooden burial chamber covered first by a stone mound, and then by a tall earthen mound. These tombs are generally known as “wooden-chamber tombs with stone mounds.” Within their massive mounds, these tombs often contain a vast trove of grave goods, in accordance with the contemporaneous Silla belief that the afterlife was an extension of the present life. Though primarily constructed during the Maripgan phase, this type of burial continued to be used until the mid-sixth century, in the Middle Ancient phase. Today, the social and political conditions of the Maripgan phase provide the necessary context for understanding the emergence and development of Silla gold crowns. 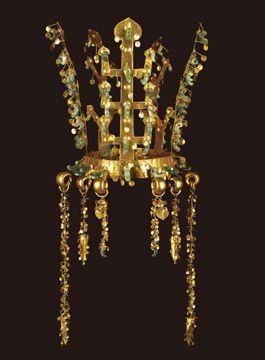 Hwangnamdaechong Tomb was excavated from 1973 to 1975 by the Cultural Heritage Committee (present-day National Institute of Cultural Heritage of the Cultural Heritage Administration). In addition to being the largest Silla wooden-chamber tomb with stone mound ever discovered, Hwangnamdaechong Tomb contained an impressive array of personal ornaments decorated with precious stones, rare imported items, and grave goods, including a vast quantity of iron and ceramic objects. Although the tomb is generally agreed to be a royal tomb, the identity of the tomb’s occupant has never been established, which is why it was officially named “Hwangnamdaechong Tomb” (meaning “large tomb in Hwangnam-dong”) by the Cultural Heritage Committee in 1976. Hwangnamdaechong Tomb is a double tomb, consisting of two attached tomb mounds; the king is buried in the south mound, while the queen is buried in the north mound. Excavations revealed that the king’s burial (south mound) was constructed first, with the queen’s burial (north mound) being added a short time later. Both are wooden-chamber tombs with stone mounds, but the queen’s burial was furnished with an additional compartment for grave goods, located next to the burial chamber.

The respective genders of the two occupants were determined in part by the discovery of a silver belt ornament in the north mound, which bore the inscription “夫人帶,” meaning “belt of the wife” or “belt of the queen.” The queen was laid to rest wearing a gold crown and gold belt, as well as gold bracelets, gold rings, gold necklaces, and a gold chestlace. Although the queen’s clothing and any fabrics attached to these personal ornaments had disintegrated, she was likely buried wearing magnificent robes that she also worn while she was alive.

The gold crown from the queen’s burial is a typical example of a Silla headband crown with branch-shaped uprights. It consists of a narrow headband with three straight uprights with symmetrical branches on the front and two sides (respectively); two shorter angled uprights with alternating branches in the back; and six strands of dangling pendants with thick rings (three on the left and three on the right). In addition to being inscribed with elaborate patterns, the surface of the crown was further embellished with curved jades and gold spangles, attached with thin gold wire. At one time, the ends of the headband appear to have been affixed with ties made from an organic material. Each of the six dangling pendants is topped by a thick ring, indicating that the crown’s wearer was female; the earrings and dangling crown pendants of males generally feature thin gold chains. Notably, this is the earliest example of a Silla gold crown with both types of uprights (i.e., straight uprights with both symmetrical branches and angled uprights with alternating branches).

Perhaps the biggest mystery of Hwangnamdaechong Tomb concerns the crowns of the king and queen. Contrary to expectations, while the queen’s crown is solid gold, the king’s crown is gilt-bronze (i.e., bronze covered with a thin sheet of gold). In fact, the king’s crown is the only gilt-bronze Silla crown ever found that was decorated with attached curved jades. In addition, the king’s gilt-bronze crown has only three straight uprights with symmetrical branches, with no attached angled uprights. Thus, these two crowns seem to demonstrate how the Silla tradition of headband crowns with branch-shaped uprights changed over time.

The development of Silla headband crowns can be divided into three stages, based on the style of the decorative uprights. The crowns of the first stage have only three straight uprights with symmetrical branches. In most crowns of this phase, the symmetrical branches of the uprights are slanted at a relatively natural angle, rather than extending up at a precise right angle. This phase has been categorized as the “prototype” style of crown, with the representative example being the gold crown from Gyo-dong, Gyeongju. The king’s gilt-bronze crown from the south mound of Hwangnamdaechong Tomb is the latest known example of a Silla prototype crown. Significantly, although this crown has only three uprights with symmetrical branches, the branches extend up at right angles, signaling the transition to the next phase.

The next phase, classified as the “standard” style, is generally considered to be the most refined version of the Silla headband crown. This style features a combination of three straight uprights with symmetrical branches and two angled uprights with alternating branches. It has been suggested that the newly added angled uprights were modeled after deer antlers, but there is little corroborating evidence to support this interpretation. Nevertheless, in Silla ideology, both trees and deer seem to have been revered as mediums that connected the heavens and the earth. From this stage onwards, the symmetrical branches of straight uprights always extended up at a right angle. The earliest known example of a standard-type Silla crown is the queen’s gold crown from the north mound of Hwangnamdaechong Tomb, with later, more developed examples having been found in Geumgwanchong Tomb and Seobongchong Tomb; these crowns, which have three tiers of branches, represent the “emergent stage” of the standard type. Later examples of standard-type crowns, found in Cheonmachong Tomb and Geumryeongchong Tomb, have four tiers of branches, resulting in a fuller, more opulent appearance; these crowns represent the “development stage.”

The third and final phase of Silla crowns is known as the “regression” style, which presaged the end of the tradition of Silla crowns. In this period, the political authority of Silla leaders seems to have declined. The crowns themselves were either overly decorated or greatly simplified, sometimes losing their decorations altogether. The final known example of a regression-type Silla crown is made from a sheet of copper. The tomb where this copper crown was found also included bells, which are typically associated with a priest or shaman. As such, the person who owned this crown may have been a shaman or religious figure with no political authority.

These changes provide important insights into the evolving symbolism of headband crowns with branch-shaped uprights. According to textual records, the first Silla rulers and royalty were shamans, and they continued to oversee state rituals into the Maripgan phase. Thus, it is estimated that gold headband crowns with branch-shaped uprights were originally intended to symbolize a sacred tree. The decorative motifs on the crowns have also been associated with the Maripgan’s dual role as both the political ruler of the kingdom and the person who presided over state rituals.

In Silla’s Middle Ancient phase, which followed the Maripgan phase, King Beopheung (法興王, r. 514-540) declared Buddhism to be the state religion and delegated the former duties of the Royal Shrine (神宮, the center of traditional state rituals) to Buddhist temples. With this shift, the Silla monarch, who had once been charged with overseeing state rites, became a primarily secular figure. In accordance, it seems that the king no longer required the gold crown with branch-shaped uprights, which was associated with traditional rituals. Having lost its political associations, the gold headband crowns with branch-shaped uprights may have been passed down to or adopted by the wider population, such that it came to be worn by shamans or other spiritual leaders.

Silla gold headband crowns were sometimes accompanied by gold belts, which also served as symbols of royal authority. Such belts consisted of a leather band covered with square gold plaques, adorned with heart-shaped spangles, along with numerous gold dangling pendants shaped like various objects. The belt plaques were sometimes decorated with trefoil designs and images of dragons and phoenix, two popular Goguryeo motifs that seem to have been adopted by Silla. In particular, the trefoil design became well established in Silla, where it changed and developed over time. The dangling pendants were shaped like fish, curved jades, knives, pincers, and various other objects. 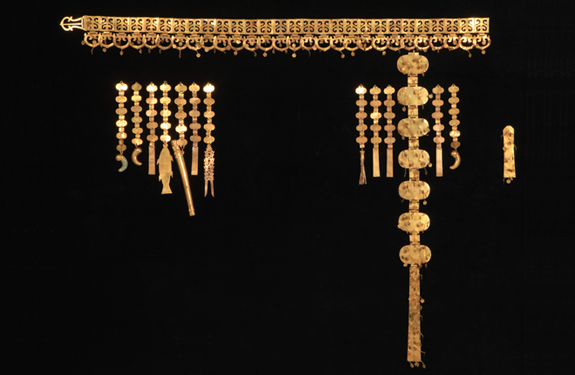 Who Is Buried in Hwangnamdaechong Tomb?

The academic community has generally agreed that the construction of great tombs, such as Hwangnamdaechong Tomb, began after Silla escaped the influence of Goguryeo and began to develop its own independent culture. Based on this theory, many Korean and Japanese scholars proposed that Hwangnamdaechong Tomb was occupied by Nulji Maripgan (訥祇麻立干, r. 417-458), the nineteenth ruler of Silla. Later scholars, however, argued that Silla’s internal development occurred sooner than originally thought. Also, based on comparative analyses with fourth-century tombs in northeast China, the grave goods from Hwangnamdaechong Tomb are estimated to have been produced in the earliest part of the Maripgan phase. Accordingly, it has also been suggested that Hwangnamdaechong Tomb is the royal tomb of Naemul Maripgan (奈勿尼師今, r. 356-402), the seventeenth ruler of Silla. More recently, it has been argued that Hwangnamdaechong Tomb was constructed in a transitional phase, when the representative elements of the early Maripgan phase had been left behind but traces of Goguryeo influences still remained. According to this perspective, and the fact that the king’s crown is made from gilt-bronze, some have speculated that the tomb is occupied by Silseong Maripgan (實聖 麻立干, r. 402-417), the eighteenth ruler of Silla, who lost the throne to Nulji Maripgan. Of course, the identity of the queen buried in the north mound is dependent upon the identity of the king in the south mound.