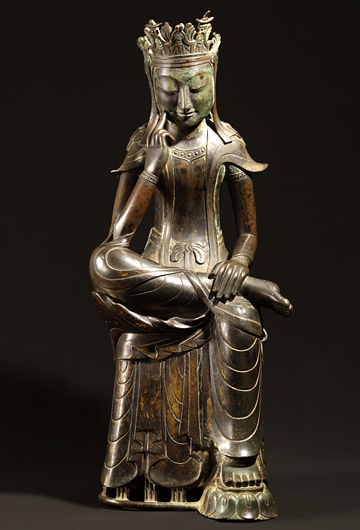 Pensive bodhisattva statues are characterized by their unique pose, in which the figure is seated with one leg stretched across the other knee, one elbow resting on the horizontal leg, and the fingers of the raised arm resting lightly against the cheek. This striking pose creates a pleasant organic harmony among the face, arm, legs, and waist, while also creating folds in the robe that can be very difficult to sculpt in a natural way. With this in mind, the emergence of pensive bodhisattva statues can be seen to represent the true beginning of the history of Korean Buddhist sculpture. Showcasing exquisite aesthetics and a superb casting technique, this Pensive Bodhisattva (National Treasure 78) is one of the most outstanding examples of the form, not only in Korea, but throughout all of Asia.

What Is a “Pensive Bodhisattva”?

The contemplative pose of pensive bodhisattva statues originally derived from the image of Prince Siddhartha meditating on the nature of human life before leaving his palace. In other parts of Asia, such sculptures often appeared as secondary figures, adjacent to the main Buddha in a triad, but in Korea, they were primarily produced as independent sculptures, especially during the sixth and seventh centuries of the Three Kingdoms Period. The two preeminent examples of Korean pensive bodhisattvas are National Treasures 78 and 83, which, along with Seokguram Grotto, are considered to represent the greatest masterpieces in the history of Korean Buddhist sculpture. Notably, Korean pensive bodhisattva statues were transmitted to Japan, where they influenced the production of pensive bodhisattvas during the Asuka and Hakuho periods. In both Korea and Japan, however, the pensive bodhisattva is generally considered to depict Maitreya Bodhisattva, also known as the future Buddha. This iconography is thought to reflect the Sutra on the Descent of Maitreya, in which Maitreya follows a similar path in life as that of Prince Siddhartha.

Along with National Treasure 83 (also a pensive bodhisattva), National Treasure 78 is one of the representative examples of Korean sculpture. The figure is wearing a magnificent tall crown, uniquely decorated with a sun and moon. This sun and moon design originated from crowns of the Sasanian Empire, before being transmitted via the Silk Road to the East, where it came to be used as a crown for bodhisattva statues. Similar crowns with the sun and moon design have been found on bodhisattva statues in Gandhara, India, as well as in the Dunhuang Mogao Caves, Yungang Caves, and Longmen Caves of China. When seen directly from the front, this pensive bodhisattva has a somewhat feminine appearance with a slender waist. Viewed from the side, however, the figure seems to convey a dynamic rising energy. Overall, the supple curves of the body are highlighted, with a refined, sharpened touch from the long narrow strip of ornamental cloth that elegantly covers the body and protrudes with a point from both shoulders. The robe creases on the knees and stool flow variably from oval to S-shaped curves, creating a superb balance. 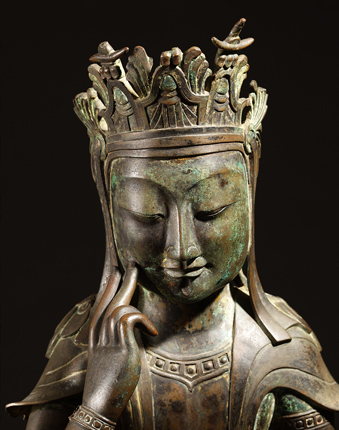 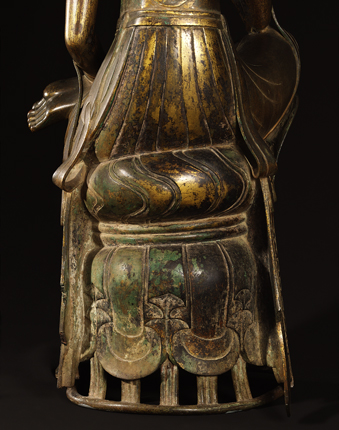 With the body bent slightly at the waist and the head tilted downward, the contemplative pose looks very natural, although the arms are a bit lengthened. Even so, the lifelike posture clearly conveys the expertise of the sculptor. The fingers of the right hand evince a sense of mystery and movement, as if gently caressing the cheek in a moment of deep realization. Hence, although the overall aesthetics are guided by strict realism, the sculptor was still able to capture the uncanny impression of a religious epiphany. This gilt-bronze statue combines all of the ideal qualities of a pensive bodhisattva sculpture, with the quaint smile, natural pose, organic harmony among the body parts, rhythmic flow of the ornamental cloth and waistband, and exemplary casting.

Almost 1 meter in height, the statue is relatively tall, but the interior is hollow and the bronze layer is only 3 to 8 mm thick. The combination of such size and thinness could only be achieved with a highly advanced casting technique. Because the bronze layer is so thin, a small iron cross was inserted into the hollow body for stability. There is a vertical iron rod running down the spine and a horizontal bar across the shoulders, held in place with a small iron nail in the back of the head. Only through such advanced casting techniques could such a beautiful and vivacious Buddhist statue be produced. 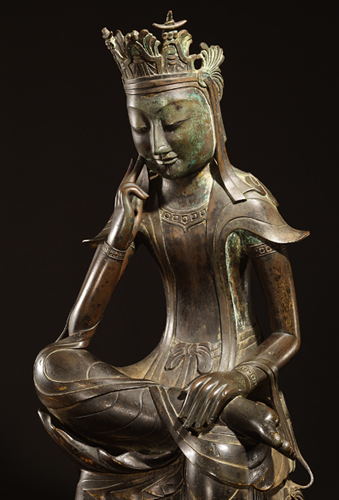 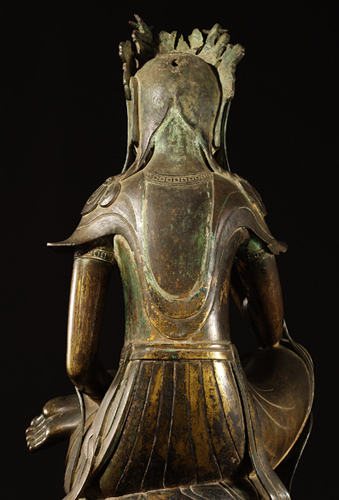 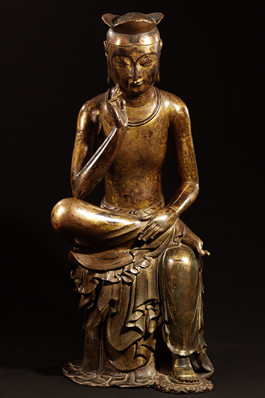 The two most renowned examples of Korean pensive bodhisattva sculptures have been respectively designated as National Treasure 78 and National Treasure 83. Although both were produced during the Three Kingdoms period, they show some distinct formal differences, starting with the shape of their crowns. Unlike the sun and moon crown worn by National Treasure 78, National Treasure 83 has a crown consisting of three semi-circles, a style known as the “three-mountain crown” or “lotus flower crown.” The figure’s upper torso is bare, with the exception of a modest necklace. Based on the simple but balanced body, the natural three-dimensional creases in the clothing, and the clearly rendered facial features, the sculpture is believed to have been produced in the early seventh century, shortly after National Treasure 78, which was made in the late sixth century. At 93.5cm in height, National Treasure 83 is the largest Korean gilt-bronze pensive bodhisattva statue in existence. Moreover, because of its close resemblance to the famous Pensive Bodhisattva from Koryuji Temple in Kyoto, it represents compelling evidence that Buddhist culture was transferred from Korea to Japan in early history.

The exact provenance of Pensive Bodhisattva (National Treasure 78) is unclear. Opinions are divided on whether the sculpture was produced by the Silla Kingdom or the Baekje Kingdom. More recently, some scholars have argued that the statue may have been produced by the Goguryeo Kingdom, based on the powerful energy conveyed by the body and the long ornamental cloth, as well as its resemblance to Goguryeo tomb murals of the Four Guardian Deities (i.e., blue dragon, white tiger, black turtle, and red phoenix). The figure also shares some features with Buddhist statues from China’s Northern Wei and Eastern Wei, which are known to have been popular in the Goguryeo Kingdom. As yet, however, research has not produced any conclusive evidence about which kingdom was responsible for this sculptural masterpiece. The issue is complicated by the fact that the Pensive Bodhisattva (National Treasure 78) shows many universal artistic qualities that cannot be easily attributed to a certain region.