This ornate incense burner, designated as National Treasure 287, was recovered from a temple site in Neungsan-ri, Buyeo. It would once have been placed on a Buddhist altar to offer incense to Buddha. The pedestal is shaped like a dragon with its front legs extended, while the bowl and lid of the incense burner combine to form an enlarged lotus bud, elaborately adorned with mountain peaks, musicians, and sacred animals, with a noble phoenix perched at the top.

Dragon with Lotus Bud in its Mouth 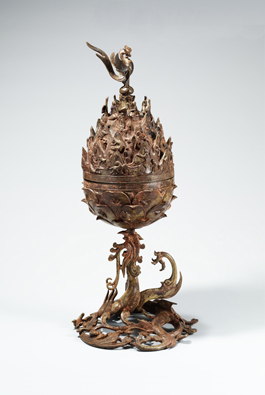 The lid of the incense burner is shaped like ascending levels of mountains, topped by a phoenix that stands on a jewel-shaped knob with its wings spread wide. The mountains are intended to represent Boshan, a mythical peak where Taoist immortals dwell for eternity. Boshan, which actually encompasses three sacred mountains—蓬萊山 (Penglaishan), 方丈山 (Fangzhangshan), and 瀛洲山 (Yingzhoushan)—was believed to be located in the sea to the east of China. Amongst the mountains are various people, animals (both real and imaginary), and landscapes that symbolize the Taoist sages. For example, just below the phoenix are five musicians clad in robes with the tops of their heads shaved and their hair tied to the right. The musicians are realistically depicted in various poses, and each plays a different traditional instrument: geum, wanhap, donggo, jongjeok, and so. The musicians are arranged among five mountain peaks, each of which is topped by a bird looking up at the phoenix. Also featured on the lid are twenty-four mountain peaks, each of which features a band densely filled with lines that represent trees, thus conveying the impression of thickly forested mountains. Various animals and exotic birds are dramatically depicted in relief amongst the peaks and valleys, along with a waterside landscape with a gently flowing stream, six trees, twelve rocks, and a waterfall.

The mountains are also occupied by a menagerie of animals, including a tiger, boar, deer, elephant, and monkey, along with various imaginary creatures. Moreover, sixteen different people can be found doing various activities, such as strolling around the mountains, hunting on horseback, meditating, and fishing. The lower rim of the lid and the upper rim of the body are each decorated with a band containing an elaborate arabesque pattern, so that the two bands are symmetrically joined when the lid is in place. 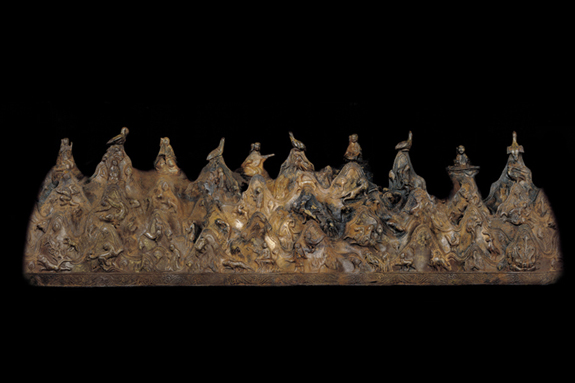 Detail of the lid, which is elaborately decorated with a design of the sacred mountain of Boshan, home of the Taoist immortals.

The bowl of the incense burner is made to resemble three rows of lotus petals with protruding tips. The sizes of the lotus petals are proportionate to the diameter of the bowl, so that the petals in the top row are the widest and those in the bottom row are the most narrow. Each petal is convexly folded at the tip and decorated with a densely incised design of slanted lines, while incised lines are used in the bottom row to imply multiple layers of petals. Each petal is decorated with a relief carving of a fish, a heavenly bird, or a heavenly animal, while smaller animals or people are also interspersed between the petals of the top row. In total, the bowl is decorated with two human figures (i.e., a musician playing a drum and someone riding an animal) and twenty-four animals, including a pair of intertwined birds in between lotus petals on the top layer.

The pedestal of the incense burner is shaped like a dragon with a cloud-shaped openwork mane, dynamically crouched as if preparing to leap into flight. The dragon has a bifurcated horn that extends from the top of its nose to the back of its neck, and a mouthful of sharp teeth that are expressed in detail. A hollow rod that emerges from the dragon’s mouth connects the pedestal to the bowl of the incense burner. The base of the pedestal is formed by the coiled body of the dragon, along with openwork cloud and lotus flower designs that convey the illusion that the dragon is passing through waves on its way to the heavens.

X-ray Analysis of the Incense Burner 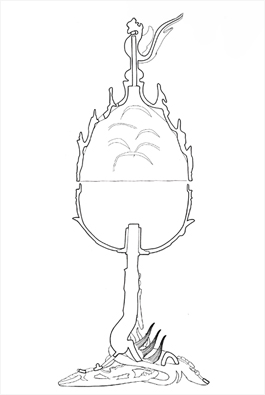 The incense burner has two halves: the upper half (i.e., the hemispheric lid) and the lower half, (i.e., the bowl and pedestal). As confirmed by X-ray analysis, the phoenix at the top is connected to the lid via a hollow rod that extends up from the lid, running through the jewel-shaped knob and into the body of the phoenix. In addition to connecting the phoenix to the lid and reinforcing the attachment of the mountain decorations, the hollow rod also helped to ventilate the incense smoke through two small holes in the phoenix’s chest. In addition to those two holes, there are ten more holes in the lid, arranged behind the overlapping mountains. When viewed from above, these ventilation holes form a double pentagon pattern, with the holes of the inner and outer pentagons in alignment. This careful arrangement indicates that the placement of the smoke holes was planned from the early stages of production. Interestingly, however, the incense burner has two different types of ventilation holes; some of the holes are perfect circles with a diameter of 0.6cm, while others are irregularly shaped with a diameter of up to 1cm. Thus, it is estimated that the precise circular holes were created during the casting process, while the irregular holes were added later with an awl or other tool, after the incense burner had been used. The inner and outer contours of the lid are well aligned, and the lid has an even thickness of around 0.5-0.6cm. As mentioned, the bowl of the incense burner is connected to the dragon-shaped pedestal via a hollow rod in the dragon’s mouth. The dragon and the rod were cast together, and the rod was inserted into a hole on the bottom of the bowl to connect the two sections.

Notably, X-ray analysis revealed that the pedestal was not cast as a single piece. The stem of the pedestal and the disc-shaped base were cast separately and joined with a connecting piece, for greater strength and stability. The base of the pedestal is formed by the dragon’s coiled tail and its legs, one of which is raised. The base is further adorned with designs of waves, lotuses, and small circles. The dragon’s three remaining legs are planted on the ground forming a right triangle, providing the main support for the bowl. Such an adept combination of form and function clearly demonstrates the precise planning that went into the design and manufacture of the incense burner.

Mix of Buddhist and Taoist Elements: Microcosm of Baekje Ideology 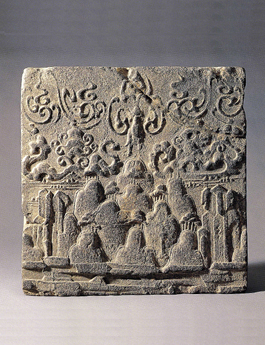 Photo of Baekje Tile with Landscape and Phoenix Design (Treasure 343). Featuring both Buddhist and Taoist elements, the gilt-bronze incense burner illuminates the prevailing Baekje ideology of the time.

In fact, the iconography of the incense burner is so complex and detailed that there is as yet no consensus interpretation of its exact meaning. However, most scholars agree that the overall layout of the decorative elements is meant to reflect the philosophy of yin and yang. The top of the incense burner, where the phoenix is perched, represents the heavens, or yang. Below the phoenix, the mountains are occupied by land animals and people (Taoist sages) of the earth. Moving down, there are lotus flowers followed by fish and other creatures associated with the sea. Finally, the dragon (also believed to be a sea creature) at the bottom represents yin. The bowl and lid of the incense burner form a large lotus bud that emerges from the mouth of the dragon. In Buddhism, lotus flowers represent rebirth and reincarnation, and the designs and images in the lotus petals seem to carry similar associations. It has also been suggested that the lotus bud represents the “Lotus Treasury World” of Vairocana Buddha, or Sumeru, the mountain that stands at the center of the world in Buddhist cosmology. Designs that incorporate both Buddhist and Taoist elements can also be seen on a silver cup and saucer excavated from the Tomb of King Muryeong and on a tile found in Waeri, Buyeo, indicating that both belief systems were an important part of the Baekje ideology and aesthetic tradition. Notably, this incense burner was not discovered at an ordinary Buddhist temple, but rather at the site of a temple affiliated with the Neungsan-ri burial ground, which was the royal cemetery of the Baekje Kingdom. Thus, whereas most ancient incense burners were used in typical Buddhist ceremonies, this one was probably used in ancestral rites for the deceased Baekje kings. As such, it can be regarded as a microcosm of the ideology of Baekje.